Everything has been digitized in this digital era, and nothing seems possible without programming. The fact that C is the building block of all the programming languages can’t be denied. Also, the extended version of C is C++, which you can call a subset of C. Every one of us must have gone through the basic concepts of this language before stepping into the world of programming. And when it comes to implementing something no matter big or small, nothing can replace IDEs. 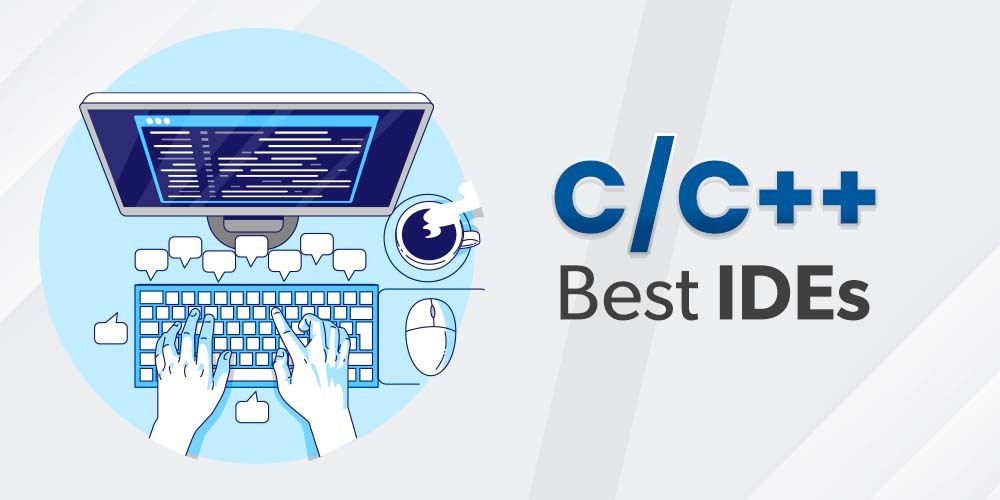 What are IDEs? From working for small projects to big implementations like web applications, all you need is a single platform where you get numerous features required such as text editor, syntax highlighter, customizable interfaces, compiler, auto-save code, version control, debugger, build automation, and deployment. And those platforms which offer these features are called IDEs (Integrated Development Environment).

Why choose IDEs? Because it makes writing programs easily, efficiently, and effectively. It saves a lot of time by converting the program to machine-level code or byte-code. And the best part, is you also get the freedom to choose the programming language of your interest. As there are so many IDEs today, you would have been confused as to which one to use.

Don’t Worry! To avoid confusion, we have brought the Top 7 IDEs for C/C++:

Eclipse is indeed a free and open-source IDE written in Java and developed by IBM. It is well known for its broad community support as it supports nearly thirty programming languages ​​(and the C/C++ version is named Eclipse CDT (Eclipse C/C++ Development Tooling). Eclipse IDE for C++ has all the features one would expect like Code completion, auto-save, compilation and debugging support, remote system explorer, static code analysis, profiling, and refactoring. You can also extend its functionalities by integrating various external plugins and also this is multiplatform and can run on Windows, Linux, and macOS.

It comes with various functionalities:

Visual Studio Code, also an open-source code editor developed by Microsoft (tech-giant). Even though it works well with all types of Operating Systems like Windows, macOS, and Linux, it is well known for windows that work with Git version control systems. Also, it comes with the remarkable features of intelligent code completion based on variable types, essential modules, and function definitions. There’s a free version that works for most needs, and an enterprise version (paid) with additional features and support, you can use any one of these as per your need. It provides the best C++ compiler and you can control various versions of one program very easily.

Overall, VS Code’s efficiency and portability balanced with its powerful array of features make it stand out as the best all-around code editor for development in C++.

The features of VS Code:

NetBeans, a free and open-source IDE, developed by Apache Software Foundation – Oracle Corporation is considered one of the best IDEs for C++ developers. It also has a project window that shows a list of projects currently existing on it and allows you to create C/C++ applications using dynamic and static libraries. The reason behind highly recommended for students or beginner-level C/C++ developers is because of its better drag and drop functionalitiessimilar to Eclipse. It runs on multiple platforms such as Windows, Linux, Mac OS X, and Solaris.

CLion is developed by Jetbrains and is the most-recommended cross-platform(supports macOS, Linux & Windows integrated with the CMake build system) IDE for C++ programmers. Before opting for CLion, you need to know that it is a paid IDE and you’ll have to purchase the respective subscription to move ahead with it. However, you can move on with their Education and Open Source subscription plan to use it free. It also counts itself as one of the few IDEs to have local and remote support, which allows you to code on a local machine but compile on remote servers. It supports Embedded Development and can be integrated with CVS (Concurrent Versions System) & TFS (Team Foundation Server).

It contains the below-mentioned features:

Moving ahead, we have Code::Blocks, an open-source C/C++ IDE developed using wxWidgets, which is a GUI toolkit. It supports Windows, macOS, and Linux. You can also access the source code of Code::Blocks and make contributions by adding new features to it as per your requirements for a C++ IDE. It’s very extensible and its fully configurable feature lets it meet the most demanding needs of its users. The IDE which has all the features you need has a consistent look, feel, and operation among all other platforms.

Following are the key features it has:

Next, we have CodeLite, which is also a free and open-source IDE for C++. It is considered one of the best IDE for code refactoring and supports Windows and Mac operating systems. It also provides better support for compilers with built-in for GCC, Clang, and Visual C++. It is a good option for testing and debugging in C++ because of its easy-to-use and lightweight features. Similar to Code::Blocks, CodeLite uses the wxWidgets toolkit, and you can debug and compile using free tools like MinGW and GNU debugger. It provides better support for compilers by giving hints on errors just the moment you click on them. Through the wxWidgets creation tool, developers can design cross-platform graphical user interfaces easily.

This is again an open-source that is free for freshers and requires a commercial license for experienced developers. It runs on Windows, Linux, and macOS and developers can create mobile and desktop applications, embedded platforms. It uses the C++ compiler from the GNU Compiler Collection on Linux. On Window, it uses MinGW or MSVC with the default install and can also use Microsoft Console Debugger when compiled from source code.

Some other IDEs or text editors you can refer to are:

Vim: Vim is a free and open-source text editor which can be considered an IDE. It is an improved version of the vi editors distributed with most UNIX. It is installed by default in Mac and Linux systems whereas you can install it in Windows as per your need.

Dev C++: Dev C++ is a free and graphical IDE that uses a MinGW compiler system that can create Windows and Console-based C/C++ applications. It was originally developed by “Bloodshed Software”. This supports Windows OS only.