What Is Beta Testing?

User Acceptance Testing is another name for beta testing. Beta testing is the type of testing we did before the software was released. It is also a type of silent testing that does end-to-end software testing. Real people usually carry it out. After the alpha testing, this testing was carried out. A limited number of users are given access to beta testing to verify functionality, usability, and accessibility, among other things.

What Are the Features of Beta Testing?

Beta testing is carried out by a genuine user in a real setting. A limited number of users are given access to the Beta version to test the product’s quality. It lowers the chance of failure, ensures product quality, and conducts final testing before shipping the product to users.

The following are features of beta testing:

What Is a Beta Version of the Software?

A limited number of users are given the beta version of the product to get feedback and suggestions on improving quality. There are two types of beta versions available here.

Closed beta version: Also known as a private beta, a fast beta version is only available to a select number of persons who have been invited. Only those invited will be able to test the software and evaluate its features and specs. The Beta version symbolizes the software’s release capabilities, but it is intended for a select group of users rather than all users.

What Is the Life Cycle of Beta Testing?

End-users do beta testing, and this process cannot occur without a plan. 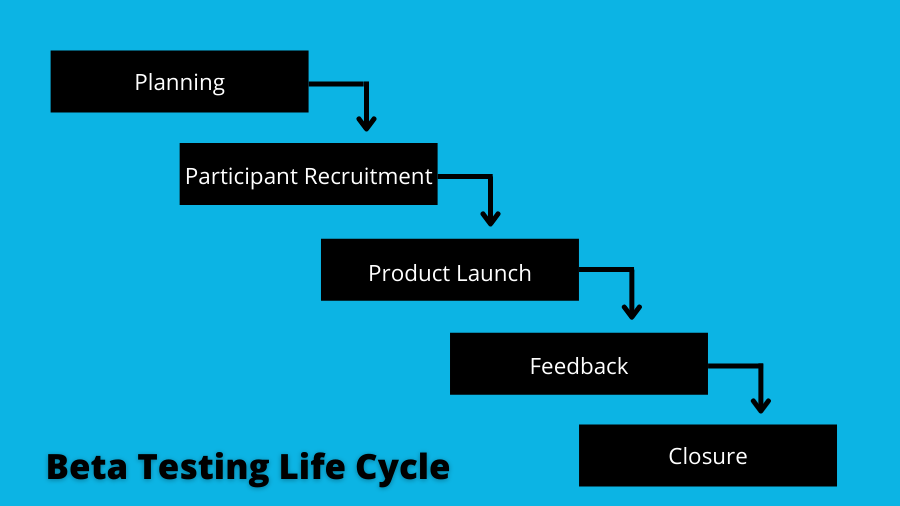 To begin the beta testing process, follow the steps below:

Planning: Proper planning is aided by beta testing. The team sets a testing strategy and goal testing during the planning stage. In this scenario, the team displays the necessity for testing, time, and required procedure information from consumers.

Product Launch: When a team of testers is assembled for a product launch. The client or user side of the product is founded or established, and people will test the product for quality and security.

Collect and Evaluate Feedback: After the testing is completed, the developers will compile the feedback from the testers and estimate it. Finally, the developers fix and address faults and defects based on their feedback.

Closure: Beta testing is completed, and the incentives are offered to the testing team once all problems have been rectified and the organization has met the exit requirements.

What Is a Beta Test Plan?

The plan for the Beta test is outlined below.

Objective: We should have mentioned the project’s goal and why there is a necessity for beta testing even after internal testing in the objective.

Scope: The scope of this plan should include the areas of functionality that will be examined or will not be tested.

Test Approach: We should describe the tested function areas and the type of testing we did, such as UI, Functionality, etc.

Schedule: We must provide information such as the start and end times of testing, the number of cycles, and the duration of each cycle.

Tools: We need to figure out the bug logging tools we’ll use during testing and how we’ll use the devices.

Budget: Bug is dependent on the intensity of the incentive of the bug.

Feedback: Collecting feedback and contemplating techniques are parts of the feedback process.

At the end of the software testing lifecycle, beta testing is performed. It suggests several benefits for testers, software developers, and users alike. This sort of testing allows developers and testers to test a product before being released to the public.

The beta testing was done at the

The following are some of the disadvantages of beta testing:

Beta testing is one technique that allows users to try out a product before it is released to the public. Complete testing on various platforms and relevant input from actual users leads to effective Beta Testing of the product, ensuring that the customer is satisfied with its use.

This method is a better way to assess a product’s success before it goes into production.