Here’s a quick Spark SQL puzzle for you; What do you think could be a problem with the following spark code (assume a spark session is perfectly configured)?

Hint 1: The input data (my_website_visits) is too large.

Hint2: We filter most of the data before writing.

I’m sure you’ve figured it out by now; If the input data is large, and the spark is configured in a perfect way, then my spark function has a lot of tasks. This means that writing is also done from multiple tasks.

This probably means that the output of this will be a large amount of very small parquet files. 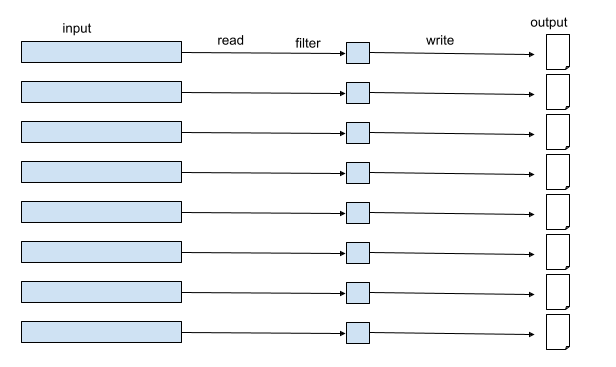 This is how it looks in Spark UI.

In this case, we have 165 tasks, which means we can have up to 165 output files. How can you improve this? Instead of writing from several workers, let’s write from one factor.

How is that in spark?

In Spark, there are two common transitions for changing the number of tasks; Merger and Repartition. They are very similar but not identical.

Repartitioning in spark SQL triggers shuffle, where merging does not occur. And as we know shuffle can be costly (note: this is true for DataFrames/DataSets). In RDDs, the behavior is slightly different).

So let’s try to use merge.

that took 3.3 minutes To run, while only the original program took 12 seconds escape from.

Now let’s try it with repartition:

It just took 8 seconds escape from. How could it be?! Repartitioning adds shuffle, so it should be more expensive.

Let’s take a look at Spark UI. This is what it looks like when using merge.

And this is when using partitioning:

The reason must be clear. Using merge reduces the number of tasks for the entire stage, as well as for the part that comes before the merge call. This means that input reading and filtering were done using only one operator with one task, as opposed to 165 tasks with the original program.

On the other hand, repartitioning creates random shuffling, and this really adds to the runtime, but since the first phase is still done with 165 tasks, the total runtime is much better than merging. Does this mean merger is evil? of course not. Let’s see an example where merging is actually a better option.

This went on for 2.1 minutes, but when using merge:

As you can see, integration helped a lot here. To understand why we need to understand how a given operator works. Limit actually splits the program into two phases and mixes them up. In the first stage, there is a file LocalLimit The process that is performed in each of the sections. The filtered data from each partition is then combined into a single partition where another limit operation is performed on that data. This process is defined as GlobalLimit.

This is how it looks in the SQL tab in Spark UI:

Note that the local limit and the general limit are in separate phases. Now if this data is somehow arranged, it would make more sense to implement the local limit on each partition before the global limit is implemented. But since there is absolutely no order here, this is clearly a wasteful operation, we could just take these 10 records at random from a partition, and logically it wouldn’t make a difference and would be much faster.

when using merger (1) Although it helps in two ways.

But there is another, more important reason why fusion (1) helps here. As we’ve seen, merge(1) reduces the number of tasks to 1 for the entire stage (as opposed to repartitioning which splits the stage), the local limit operation is only done on one partition instead of doing it on many partitions. This helps performance a lot.

Looking at this in Spark UI when using merge, you can clearly see that local and global boundaries are implemented at the same stage.

What about partition for this case?

It takes 2.7 seconds. Even slower than the original function. This is how it appears in the SQL tab in the Spark UI:

We see that in this case local and global boundaries are also performed on the same stage in that single task, such as merging. So why is it slower here?

Repartitioning rather than merging does not change the number of tasks for the entire stage, but instead creates a new stage with a new number of divisions. This means that in our case it actually takes all the data from all partitions and combines them into one large partition. This of course has a huge impact on performance.

As we have seen, merging and repartitioning can both help or harm the performance of our apps, we just need to be careful when using them.