Enterprises are embracing cloud-native technologies to migrate their monolithic services to a microservices architecture. Containers, microservices, container orchestration, automated deployments, and real-time monitoring enable you to take advantage of cloud-native capabilities. However, the infrastructure required to run cloud-native applications differs from traditional ones.

This article will describe Infrastructure as Code, its benefits, and the popular IaC tools. You will also learn how to model infrastructure as part of the CI/CD pipeline and incorporate it into the standard development lifecycle.

What Is Infrastructure as Code?

IaC helps to manage and provision infrastructure resources through code and automation. In a traditional on-premises environment, operators log into the server and execute a series of commands via the command line or console to perform changes. However, these manual configurations are prone to drifts and create inconsistent environments. It’s also a time-consuming process to deploy similar changes across your infrastructure. There is no quick way to verify the correctness of these manual changes. If there are issues, it isn’t easy to recreate them.

Let’s now take a close look at how IaC can benefit your organization.

Making infrastructure changes and deploying them is a repetitive process, and it is time-consuming if your developers/ operations team needs to do these manually in a recurring interval. With IaC, you can focus on coding and be more productive by automating the infrastructure deployments. As a result, IaC enables faster time to market for your business features.

Having your infrastructure defined in source control lets you automate the deployment process and enable developers to follow the software development lifecycle for infrastructure changes. It also empowers developers to perform successful deployments backed by efficient practices like peer review, static code analysis, and automated testing.

Performing infrastructure changes manually can lead to inconsistency between the servers and is generally the primary reason for configuration drifts. Applying changes manually is error-prone, and so IaC saves the day by standardizing the infrastructure modification process. The deployment process is faster, repeatable, and more consistent with automation and version control.

It would be best not to completely rely upon your sysadmin or operations team to deploy infrastructure changes. This increased dependency on selected operators to make server changes can create blocker scenarios when they are not available. In the long run, it is not a scalable solution. Having the infrastructure code in source control provides visibility to everyone in your organization about the current state. Developers can deploy infrastructure changes if all the stages in the CI/CD pipeline pass. If there are any issues, it’s easy to troubleshoot by looking at the change history in the source control.

Figure 1: Infrastructure as Code in action

Some open-source IaC tools can be categorized into various groups: 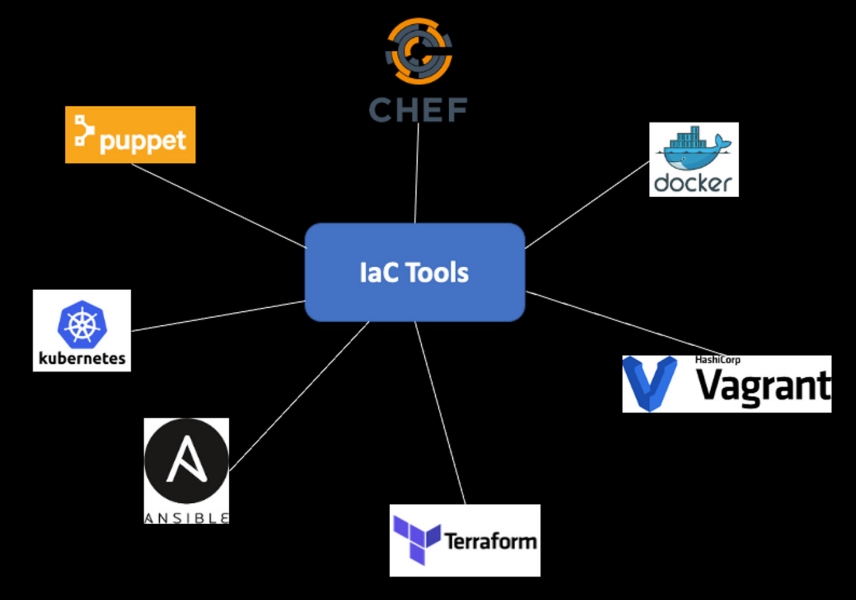 With immutable infrastructure, you create a new server with the revised configuration if you want to modify an existing server. In a cloud-native environment, where containers are spinning up and down every minute, immutability is a required feature. You should package your application and its dependencies into a container image, and as you want to modify the configuration, you deploy a new container version.

With a procedural approach, you write separate scripts to achieve the desired state. Over time, you tend to have many scripts that have been applied to your environment, and you can review the modifications via change history. The order of execution of the scripts matters, or else you end up with a different end state. Tools like Chef and Puppet follow the procedural style of infrastructure management. Please find below some of the frequently used Puppet commands:

Terraform is a cloud-agnostic, open-source tool for infrastructure provisioning. Created by HashiCorp in 2014, Terraform uses HashiCorp Configuration Language (HCL) to describe infrastructure code. It supports many providers and can help manage resources in individual cloud providers, such as AWS, Azure, and Google Cloud. Terraform is backed by a large and growing community. The primary function of Terraform is to help you create, modify, and destroy infrastructure resources. To provision resources using Terraform, you need to use the following commands:

GitOps workflows apply DevOps best practices for application development (version control, code review, automated deployments, etc.) to infrastructure deployments. GitOps is based on the declarative model, where configuration files get stored in Gi, and approved changes get automatically to the environment. As shown in Figure 4, the GitOps operator ensures that the desired state stored in Git is in sync with the actual state of the infrastructure. Enterprises are rapidly adopting GitOps to manage their Kubernetes cloud-native environments at scale. Applying GitOps practices enables continuous deployments with proper auditing and high reliability.

IT infrastructures are growing exponentially and embedding automation into every stage of the delivery pipeline ensures faster and more consistent deployments. Automating your IaC processes is as important as the automation of your application deployment. You can leverage multiple IaC tools together to automate your infrastructure management. Each of the tools mentioned in this article has its strengths and weaknesses, so having a sound understanding of those and selecting the right tool that fits your use case is critical. IaC is the future, and organizations are readily embracing it to increase the reliability of their infrastructure.