This article discusses the basic concept of Java memory management and the basics of GC along with heap and stack memory.

The Java program compiles and changes into byte code and runs on a JVM (Java Virtual Machine). Objects of a Java program get created on the dedicated heap memory for that program. Over time, more objects get created and some of the objects (un-referenced and de-scoped) are no longer needed by the program. Garbage collection is the process of Java that performs automatic memory management and frees up memory space by removing the un-referenced objects.

Java garbage collector doesn’t ensure that the heap memory will be completely free, and also, for a developer, it is not possible to force a garbage collector to run at a specific time. So it is helpful to know how memory management in Java works.

Understanding memory management helps with writing an optimized memory efficient code and helps to avoid any memory-related issues in the program, which can cause application slowness or OutOfMemoryError.

Stack is a linear data structure and is a static memory allocation by Java to store heap object references and also stores Java primitive type values. Stack accesses the memory in a last in, first out (LIFO) order and stack is faster than heap memory.

Each thread creates its own stack in the memory, which in turn makes the stack memory thread safe. 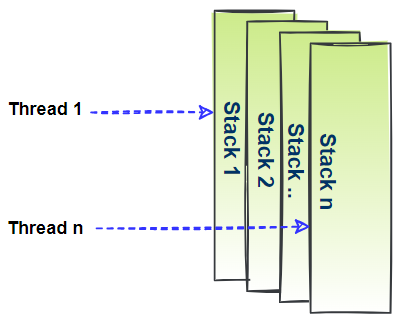 When the control is out of the scope of the method, the reference gets deleted from the stack.

In case the stack memory gets full, JVM throws a StackOverFlowError.

Heap is used for dynamic memory allocation by JVM for Java objects at runtime. Any new object gets stored in heap and the reference(example variables) of the object is stored on the stack. You can see in the example below how the variables for the sample code are stored in the heap and stack.

Below is the memory allocation in the heap for the above code snippet. 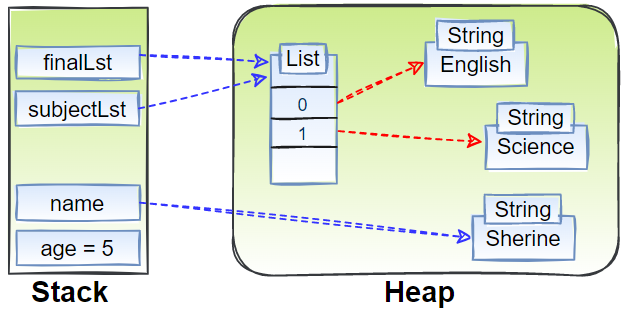 Heap memory can be broken down into smaller parts called generations, which are young, old/tenured, and permanent generations.

Image 1: Eden is full and before Minor GC

During the second Minor GC, objects (which have a reference) residing in Survivor space #1 will be moved to Survivor #2, and the age will be incremented (ie the age will become from zero to one as per the example). And all the un-referenced objects from full Young Generation space will be deleted.

The old generation is the place where the long-lived objects (most aged objects) are stored. Young generation objects have an upper limit or threshold for age. Once an object reaches that upper limit, then the object is moved to old or tenured generation.

This part of heap memory is used to store metadata for runtime classes and methods. This part of the memory has been removed completely from JDK 8 onwards by Java and replaced by Metaspace. You can still set the --XX:PermSize and -XX:MaxPermSize configuration. But you will get a warning during runtime if you run the application on JDK 8 or a higher version.

This was introduced from JDK 8 version and onwards, and it is a resizable memory area inside the heap. Metaspace holds the class metadata and it is not a contiguous memory location.

Whenever Metaspace reaches its maximum size allocated for the Metaspace, Java triggers automatic GC to free up Metaspace memory.