Kubernetes is a highly configurable and complex open-source container orchestration engine. Therefore, it is very easy to feel completely overwhelmed when learning it. The goal of this article is to present the very basic concepts at the core of it while keeping the focus on the development side.

First, let’s start with some concepts we will play with in this article.

Kubernetes is running and orchestrating containers. I assume here that you are already familiar with containers, if not, have a look at containers first.

A workload is an application running on Kubernetes. Workloads are run inside a Pod.

Pods are the smallest deployable units of computing that you can create and manage in Kubernetes.

A Pod (as in a pod of whales or pea pod) is a group of one or more containers, with shared storage and network resources, and a specification for how to run the containers. A Pod’s contents are always co-located and co-scheduled, and run in a shared context. A Pod models an application-specific “logical host”: it contains one or more application containers which are relatively tightly coupled. In non-cloud contexts, applications executed on the same physical or virtual machine are analogous to cloud applications executed on the same logical host.

Kubernetes provides several built-in workload resources. We will focus here on two of those, the Deployment and the ReplicaSet.

In order for applications to work together, they need to communicate and be accessible to other applications and the outside world. This is managed through networking.

We will focus here on the Service and Ingress notes.

An abstract way to expose an application running on a set of Pods as a network service. With Kubernetes you don’t need to modify your application to use an unfamiliar service discovery mechanism. Kubernetes gives Pods their own IP addresses and a single DNS name for a set of Pods, and can load-balance across them.

In order to redirect public traffic into the cluster, we need to define an Ingress.

An API object that manages external access to the services in a cluster, typically HTTP. Ingress may provide load balancing, SSL termination and name-based virtual hosting.

If we had to summarize those concepts in a few words, we would have this:

Interacting With a Kubernetes Cluster

The kubectl The command-line tool is the best way to interact with a Kubernetes cluster.

In order to understand the example application that will follow, let’s introduce the main concepts and patterns behind it.

A typical usage is to apply a Kubernetes resource file. Such a file (usually yaml or JSON) contains the definition of one or more resources that will be applied to the cluster.

It is required to have a Kubernetes cluster available with:

In case you do not already have this, follow instructions in the appendix.

Let’s use a sample echoserver application as an example. This application will echo the HTTP request information received (URI, method, headers, body, …) in the response it will return. It is provided as a container image named k8s.gcr.io/echoserver:1.4.

We can create a deployment for this application with the following command:

We can validate our deployment has correctly been created

In the dashboard, the Workloads overview will look like this. 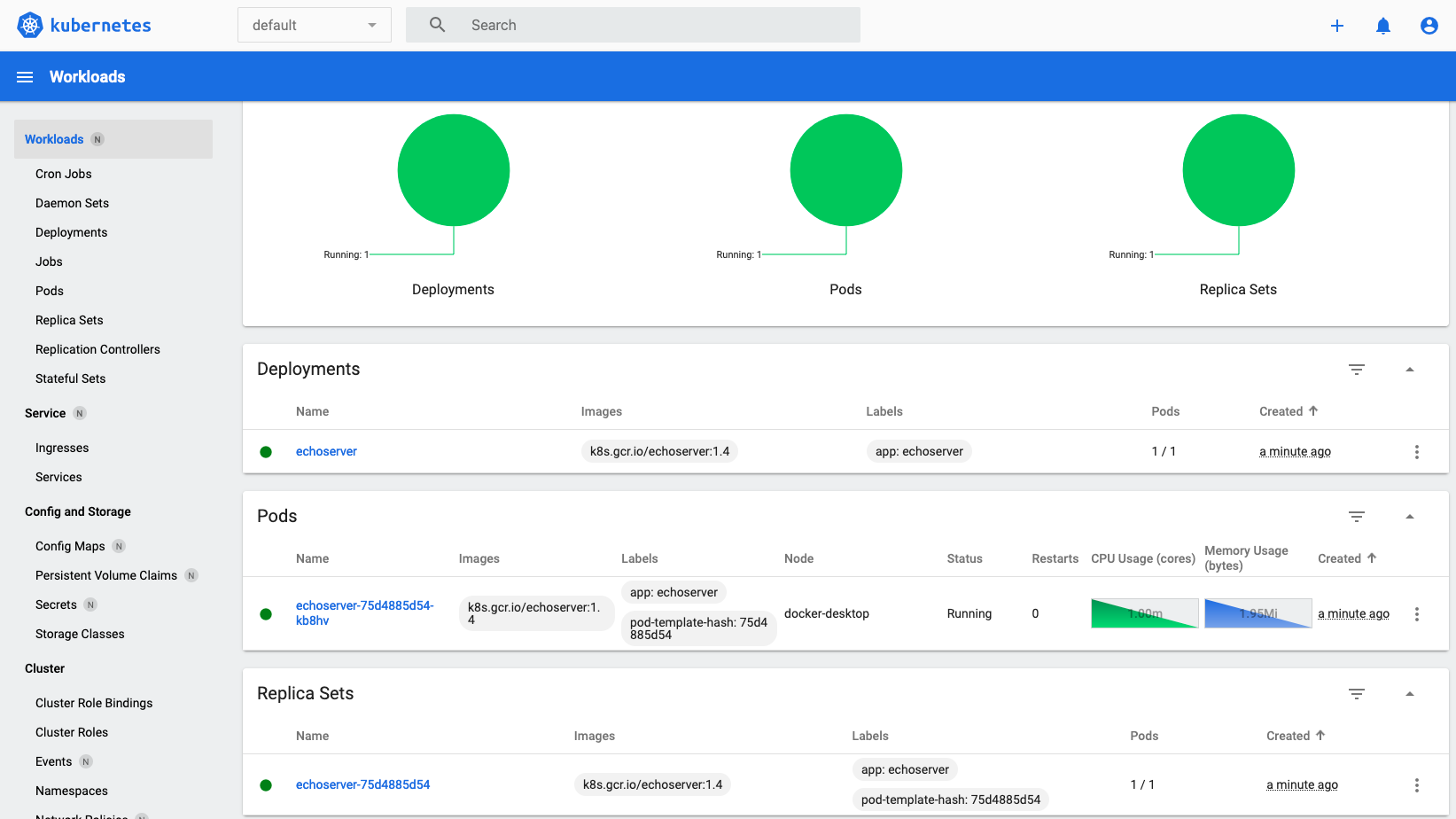 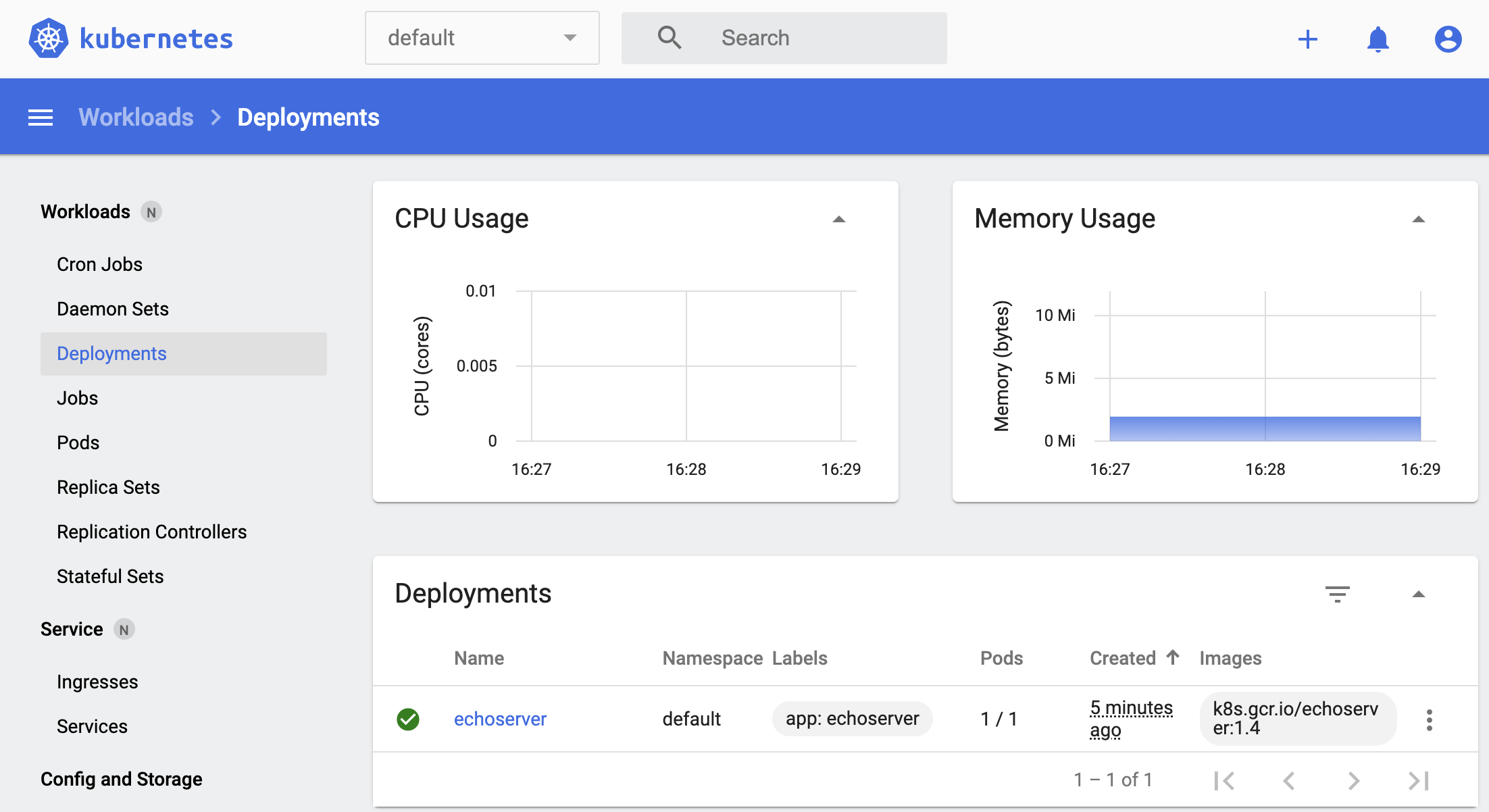 Figure 2. Deployments in the Kubernetes dashboard

Now that the application is available, we need to make it accessible. In order to do so, we need to create a service pointing to our pods and expose it externally via an ingress.

Let’s create a service that will listen on port 80 and forward the traffic to one of the pod in the deployment on its port 8080.

Now, let’s expose the service externally and route traffic matching for which the HTTP host is echoserver.localdev.me.

We can see the service and ingress.

In the dashboard, our service will appear as below.

Figure 3. Services in the Kubernetes dashboard

Now that everything is in place, we can target http://echoserver.localdev.me with curl:

One interesting feature of Kubernetes is its ability to understand application requirements in terms of resources like CPU and/or memory. Thanks to a metrics server, resource consumption is measured and the cluster can react to it.

But in order for the cluster to react, it first needs to know the application requirements. Kubernetes defines two levels: requests and limits.

Let’s patch our deployment to define CPU requests and limits. Here we will define very low limits in order to play with autoscaling. Let’s say a request of 1 milliCPU and a limit of 4 milliCPU. A milliCPU is an abstract CPU unit that aims to be consistent across the cluster. 1000 milliCPU usually boils down to 1 hyperthread on hyperthreaded processors.

We can now enable Horizontal Pod Autoscaling (HPA) for our deployment from 1 to 4 instances with a target CPU threshold of 50 percent.

We can then generate load with JMeter and see the number of pod replicas increasing until the maximum of 4 is defined in our configuration.

In the beginning, we had 0 replicas in the echoserver hpa as the hpa was just started. However a pod from the previous deployment was handling the traffic, but that pod wasn’t part of the hpa listed below.

Meanwhile, in the dashboard, we can see the load of each pod replica. 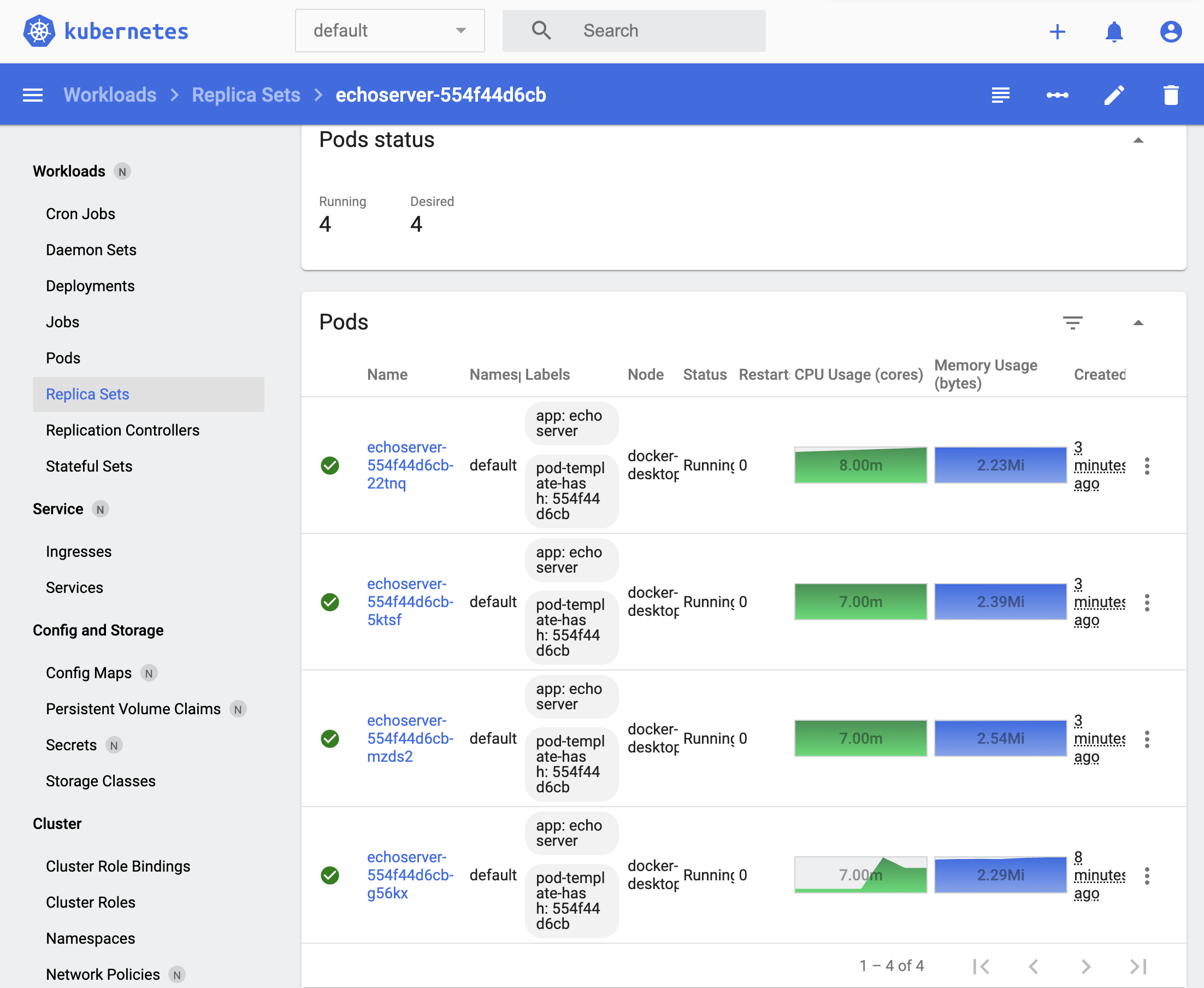 Until now we use the kubectl tool in an imperative way. It is an easy way to start, but not really the best way to deploy an application in a reproducible way.

To this end we can define our Kubernetes resources (deployments, services, ingress) as JSON or yaml files and apply them to the cluster using the kubectl apply -f <file> pattern.

Here is the content of the resources yaml file. It contains the following resources:

You can find out more about this declarative approach by reading:

Rolling Out a New Version of an Application

In the console, we can see our deployment being updated with the new image. A new ReplicaSet is started and a new pod is created. 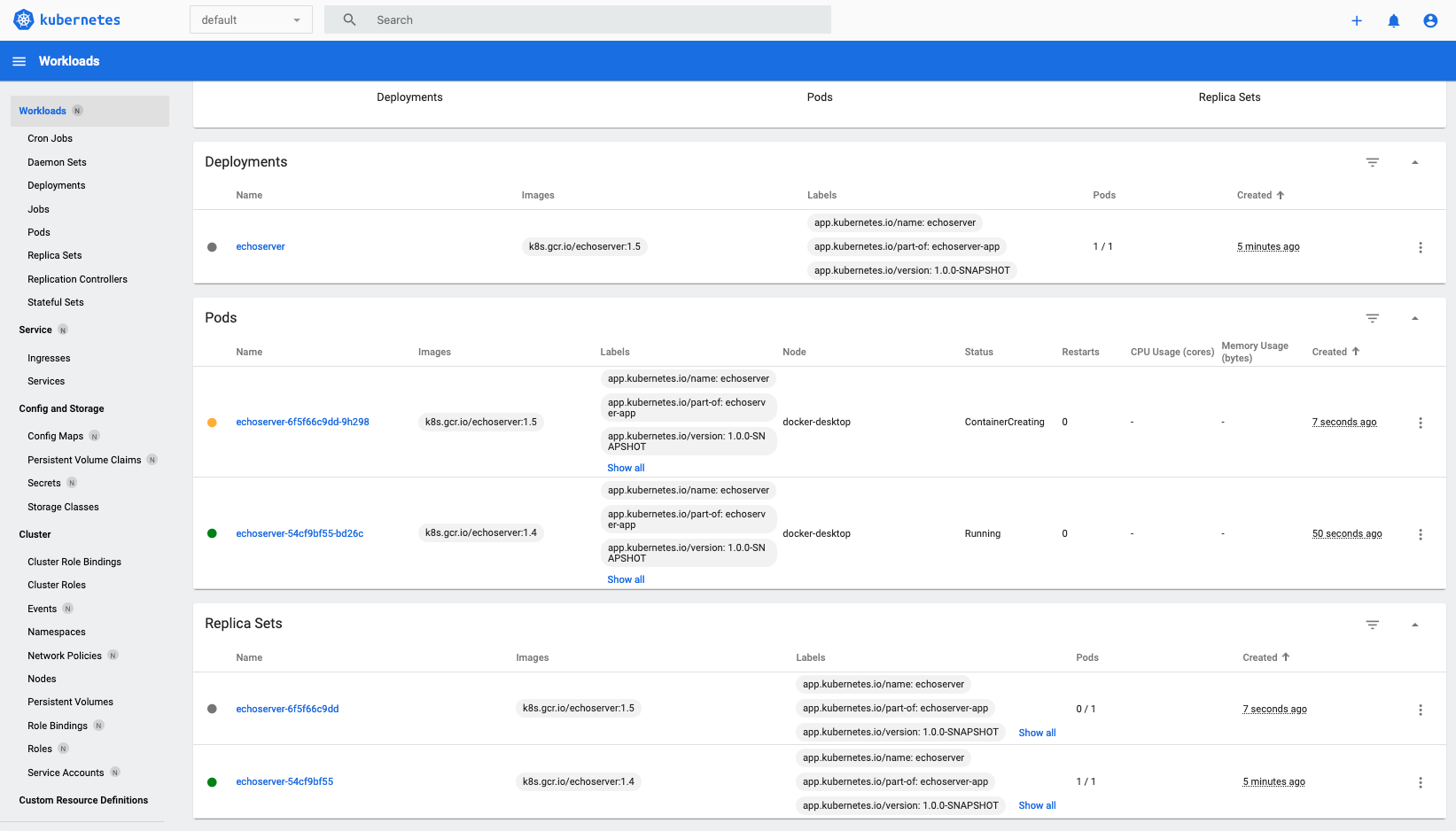 You would have seen the output being updated when the traffic was routed to the new version of the application. This is without downtime as the Deployment configuration contains information to help Kubernetes understand if the application is ready and live. Those are called Liveness, Readiness, and Startup Probes and are a must for ensuring traffic is only routed to healthy instances of your application.

Today we covered some of the basic concepts of Kubernetes. How to deploy an application, expose it outside the cluster, scale it and perform rollouts. But there’s much more to cover.

The easiest ways to install a local Kubernetes cluster are through one of:

For example with Colima:

Start the Kubernetes Proxy on Port 8001

In a background terminal start kubectl proxy. It will start a proxy that listens on http://localhost:8001/

You can install it as below:

Additional installation options are available in the ingress-nginx documentation.

Install the dashboard and the metrics server with:

To log in to the dashboard, it is necessary to use a token. You can obtain a token using the following command: