In short, the initial architecture of the data warehouse was designed to provide analytical insights by collecting data from various heterogeneous data sources into the centralized repository and acted as a fulcrum for decision support and business intelligence (BI). But it has continued with numerous challenges, like more time consumed on data model designing because it only supports schema-on-write, the inability to store unstructured data, tight integration of computing, and storage into an on-premises appliance, etc.

This article intends to highlight how the architectural pattern is enhanced to transform the traditional data warehouse by rolling over the second-generation platform data lake and eventually turning it into a lakehouse. Although the present data warehouse supports three-tier architecture with an online analytical processing (OLAP) server as the middle tier, it is still a consolidated platform for machine learning and data science with metadata, caching, and indexing layers that are not yet available as a separate tier.

The organizations, as well as enterprises, were looking for some alternative/advanced data warehousing system to resolve the complexities and problems associated with traditional data warehouse systems (as mentioned at the beginning) due to rapidly growing unstructured datasets like audio, videos, etc. After surfacing the Apache Hadoop eco-system in the post year 2006, the major bottleneck for extraction and transformation of raw data into a structured format (row and column) prior to loading into traditional data warehousing system has been resolved by leveraging HDFS (Hadoop Distributed File System). HDFS handles large data sets running on commodity hardware and accommodates applications that have data sets that are typically gigabytes to terabytes in size. Besides, it can scale horizontally by adding new nodes on the cluster to accommodate a massive volume of data irrespective of any data format on demand. You can read here how Apache Hadoop can be installed and configured on a multi-node cluster.

Another major relief achieved with the Hadoop eco-system (Apache Hive) is that it supports schema-on-read. Due to the strict schema-on-write principle with traditional data warehouses, ETL steps were very time-consuming to adhere to designed tablespaces. In one line statement, we can define a data lake as a repository to store huge amounts of raw data in its native formats (structured, unstructured, and semi-structured) for big data processing with subsequent analysis, predictive analytics, executing machine learning code /app to build algorithms, and more.

Even though a data lake doesn’t require data transformation prior to loading, as there isn’t any schema for data to fit, maintaining the data quality is a big concern. A data lake is not fully equipped to handle the issues related to data governance and security. Machine learning (ML), as well as data science applications, needs to process a large amount of data with non-SQL code so that they can be run and run successfully over a data lake. But these applications are not well served by data lakes due to a lack of well-optimized processing engines compared to SQL engines. However, these engines are not sufficient alone to solve all the problems with data lakes and replace data warehouses. Features like ACID properties and efficient access methods like indexes are still missing in data lakes. On top of it, these ML and data science applications encounter data management problems such as data quality, consistency, and isolation. Data lakes require additional tools and techniques to support SQL queries so that business intelligence and reporting can be executed.

The idea of ​​data lakehouses is at a beginning phase and will have processing power on top of data lakes, such as S3, HDFS, Azure Blob, and more. The lakehouse combines the benefit of a data lake’s low-cost storage in an open format accessible by a variety of systems and a data warehouse’s powerful management and optimization features. The concept of a data lakehouse was introduced by Databriks and AWS. 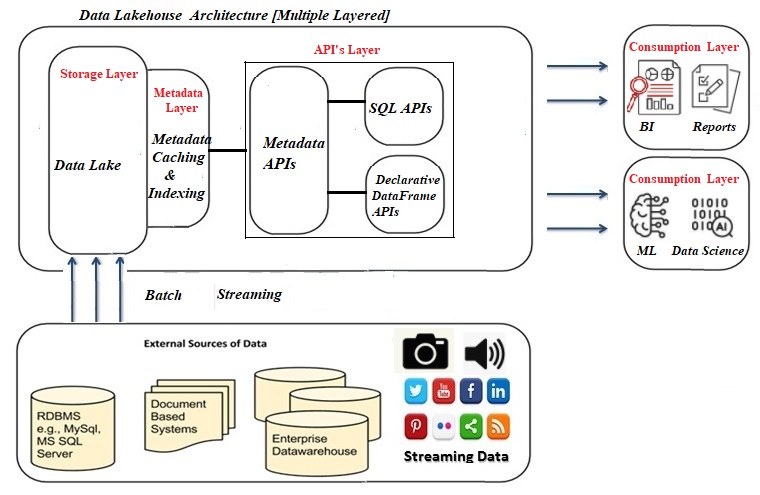 A lakehouse will have the capacity to boost the speed of advanced analytics workloads and give them better data management features. From a bird’s eye view, the lakehouse will be segmented into five layers, namely the ingestion layer, storage layer, metadata layer, API layer, and eventually the consumption layer.

The lakehouse architecture is best suited to provide a single point of access within an organization for all sorts of data despite the purpose.

Data cleaning complexity, query compatibility, the monolithic architecture of the lakehouse, caching for hot data, etc., are a few limitations to be considered before completely relying upon lakehouse architecture. Even with all the hype around data lakehouses, it’s worth remembering that the concept is in the very nascent stage. Going forward in the near future, there will be a requirement for tools that enables data discovery, data usage metrics, data governance capabilities, and more on the lakehouse.