A couple of weeks ago someone roughly commented on my YouTube channel, writing: “No-Code is a hoax and Low-Code a lie.” I deleted the comment, not as much because I wanted to censor him, but more so because I was, quite frankly, a bit embarrassed for the commenter. I didn’t want to put him into a position where he’d be forced to defend his incorrect assessment of something of such importance to the future.

Five years ago, the commenter might have been correct. However, today almost 50% of all companies developing software have already delivered projects using low-code and no-code frameworks and platforms, and roughly half of them have good experiences with such platforms. So either 50% of the world is wrong, or the commenter was wrong.

According to psychologists, the human mind has enormous difficulties understanding exponential growth. Apparently, the reasons are because we tend to observe the world linearly, and few things in the real world act according to the rules of exponential growth. So, our brains never needed the capacity to understand exponential growth. Therefore, we don’t have the neural pathways to see such things before they’ve acquired so much momentum that it slams us in the face like a Canadian truck driver in February.

To prove my point, look at the following screenshot, please: 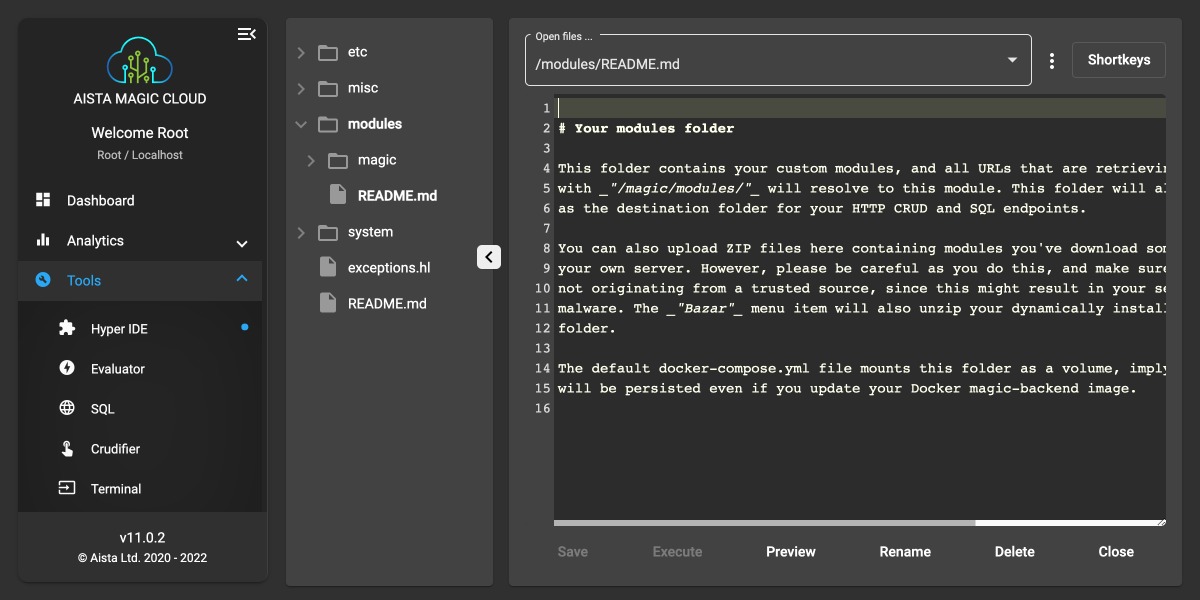 The above, of course, is Hyper IDE. Hyper IDE of course is an IDE with a “twist“. Its twist is that it generates 83% of your code 100% automatically for you, and also generates your unit tests 100% automatically. It contains the runtime for your HTTP web API endpoints, allowing you to test your code from the exact same environment you’re actually creating your code from. In addition, it works on your phone!

Did I mention Hyper IDE runs on your phone?

Maybe you don’t take Hyper IDE seriously because it doesn’t provide C#, Java, Python, PHP debug adapters, because it can’t run NUnit tests, or because it cannot [insert your favorite IDE feature here]. However, in the last 7 months, support has been added for automatically generating integration tests, executing your endpoints directly from the IDE, and integrating documentation directly into it.

In addition, today, a release was made for a completely new GUI for it, weeding out probably hundreds of bugs. In fact, there were only 2 weeks between the release today and the previous release. Still, 77 work items were closed related to Magic in the current release. The past is dead, and it was conquered by the future. There’s simply no way desktop apps can survive in the long run, simply because the advantages of having a web-based IDE are simply too large to ignore. 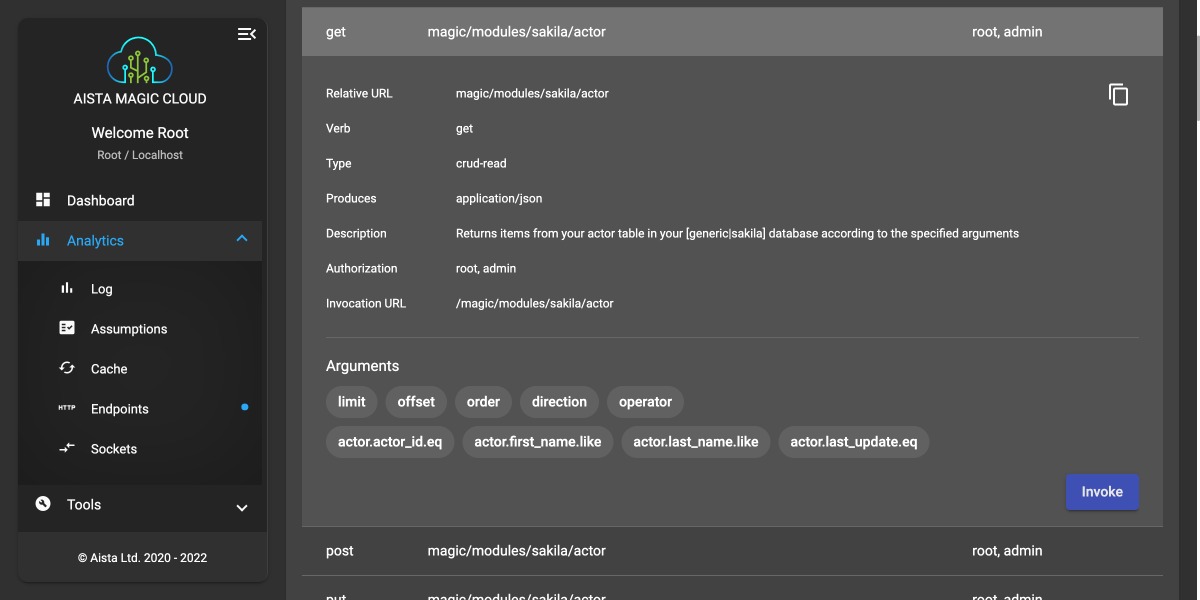 The above screenshot again shows the integrated endpoints menu item. Therefore, within milliseconds after having created your HTTP endpoint’s code, you can instantly execute your endpoint, parametrize it, and see the result. Realizing the amount of cognitive energy required to find a bug and eliminate it is exponentially growing from the point in time the bug was created until it was found and implied milliseconds matter. In fact, according to research in this area, having to wait only 5 seconds after introducing a new bug into your codebase, implies 5 to the power of 2 as much cognitive energy required to actually fix the bug as only having to wait one second.

As mentioned earlier, exponential growth is difficult to understand, and I will prove it.

Below is a screenshot of the integrated log component in Magic. 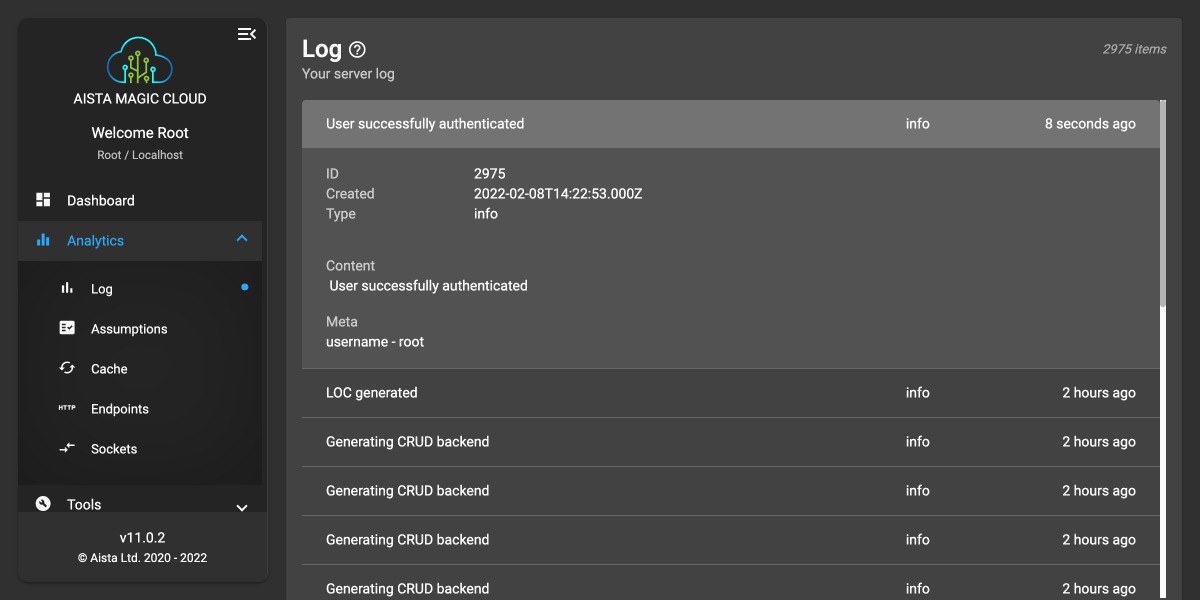 It features never-ending scrolling, and single line of code invocations to create log entries from your own code. No wiring required by you, no log4net XML configuration files, and basically nothing is required from you to make it work: it’s “just there.”

In one of my previous positions, I would spend weeks generating statistics from our 14 million large database of log items. There’s no such thing in Magic if you use the NoSQL-based logging data adapter, simply because its default TTL (Time To Live) on log items is 2 weeks. If you don’t use the NoSQL data adapter, well, then you get the following statistics: 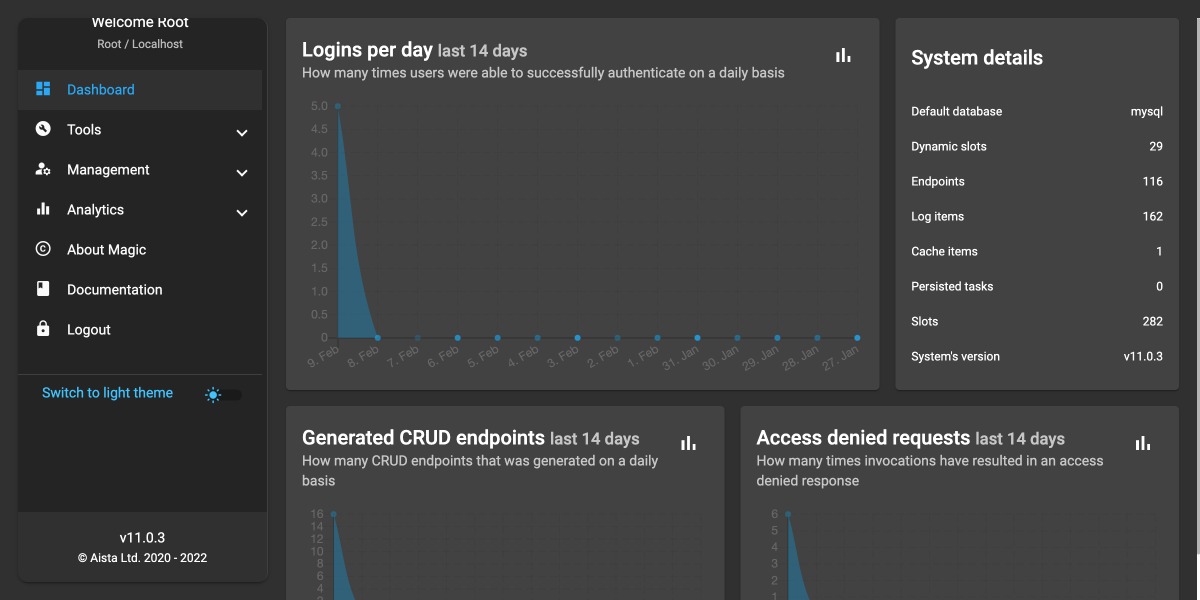 In fact, if I had been able to use Magic myself in my previous jobs, I’d probably at least have eliminated 80% of my manual work with automated processes and out-of-the-box components, solving 80% of my problem before I even needed to create a single line of code. If you imagine the average software developer’s salary in the US is approximately $100,000 per year, that implies $80,000 saved every single year from your CFO’s perspective. While we’re touching on the need for statistics, creating my own SQL to generate a result set for my graphs and charts, well, there’s an integrated SQL “workbench“ in Magic, too.

It features autocomplete and syntax highlighting, allows you to transparently use it towards MySQL, PostgreSQL, and SQL Server, and allows you to save frequently used snippets on your server. I could go on mentioning amazingly cool features in Magic for hours, but my punchline is as follows:

I do think most people are slowly beginning to realize that simple fact at roughly this exact point in time during their reading of this article.

I have nothing more to say other than: did I mention Magic is open source and that you can install it in 5 seconds using its Docker images?