In our previous article, we discussed two emerging options for building new-age data pipes using stream processing. One option leverages Apache Spark for stream processing and the other makes use of a Kafka-Kubernetes combination of any cloud platform for distributed computing. The first approach is reasonably popular, and a lot has already been written on it. However, the second option is catching up in the market as that is far less complex to set up and easier to maintain. Also, data-on-the-cloud is a natural outcome of the technological drivers that are prevailing in the market. So, This article will focus upon the second approach to see how it can be implemented in the different cloud environments.

In this approach, if the number of partitions in the Kafka topic matches with the replication factor of the pods in the Kubernetes cluster, then the pods together form a consumer group and ensure all the advantages of distributed computing. It can be well depicted through the below equation:

No. of partition in a topic of Kafka Cluster = No. of replication factor for a pod in K8s Cluster

The two most important components of this concept are i) data streaming service and ii) container management tool. In the open-source world, Apache Kafka and Kubernetes can easily be leveraged but as the cloud comes into the picture, the technology stack gets changed with various cloud-managed services for different cloud vendors. In AWS, for data streaming services, Kinesis or MSK can be used. For container management tools, ECS or EKS can be utilized. For newly developed solutions, a Kinesis and ECS combination is better whereas MSK and EKS is a combination best for the solution that is migrated from on-premise deployment. Comparisons between these two technology stacks are as follows:

In Azure, data streaming service options are different. There are many ways by which Kafka cluster can be implemented on top of the cloud. They are as follows:

A comparison between all the options is well depicted by the following table:

As far as a container management tool is concerned, Azure offers AKS (Azure Kubernetes Service) which ensures all the benefits of the Kubernetes

In GCP, container engine and container registry are used as container management tools and there are also a few options by which a Kafka cluster can be created and used as a streaming component. The options are as follows:

In the past, managing IT infrastructure was a hard job as it had to be managed manually, but now, through IaC (infrastructure as code), this can be handled very easily using config files. The two most popular infrastructure as code software tools are Terraform and Ansible, though different cloud vendors have different services for IaC. Let’s look at the example of the CloudFormation template which helps to implement the Kafka-K8s approach by using EKS and MSK services in AWS. A step-by-step guide on the basis of this is shown in the diagram: 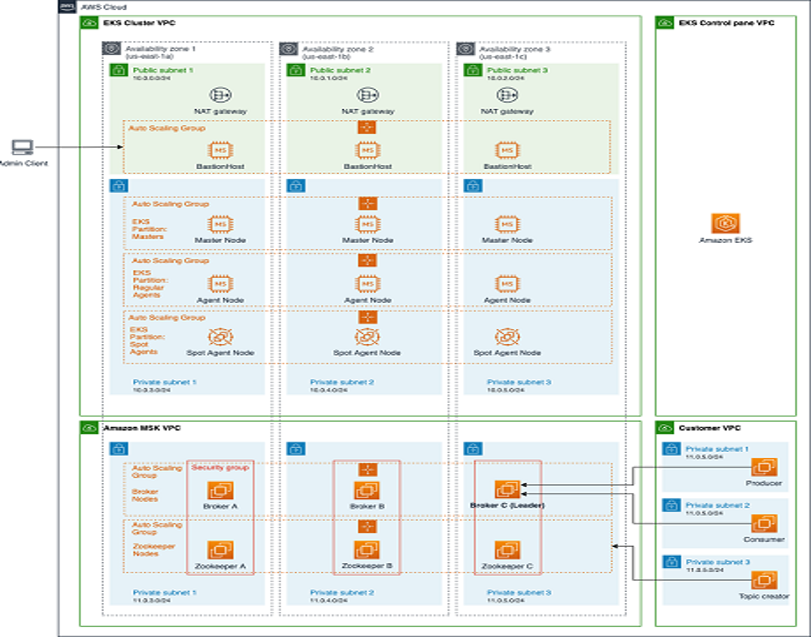 Create an EKS cluster with the help of the CloudFormation template defined either in JSON or YAML. The following config templates can be used to create an Amazon EKS cluster named Demo.

YAML template (on the basis of Figure 2):

After the creation of the EKS cluster, pods need to be through CI/CD pipeline using k8.yml and ConfigMap.yml files. The following samples of the configuration files create an application pod in the Demo EKS cluster.

The next step is to set up a Kafka cluster by using MSK and a template on the basis of Figure 2. It is as follows:

The next step is to create as many partitions in the Kafka topic as the replication factor of the EKS pod by using the following command:

For example, if the replication factor of the pod in EKS cluster is three, then in the above command, the number of partitions will be three. It ensures absolute parallel processing, as there will be 1:1 mapping between the partition of the topic and the number of replicas of the pod.

This Kafka-Kubernetes combination ensures all the benefits of parallel processing and cluster computing, and it becomes more effective when it merges with cloud computing. The speed layer of the Lambda Architecture is entirely based on stream computing, whereas in Kappa Architecture, the stream-based transformation component is the only processing layer. So, in both cases, this Kafka-Kubernetes combination can be used, and it also adds the benefits of the cloud when in any cloud vendors like AWS, Azure, GCP, etc.