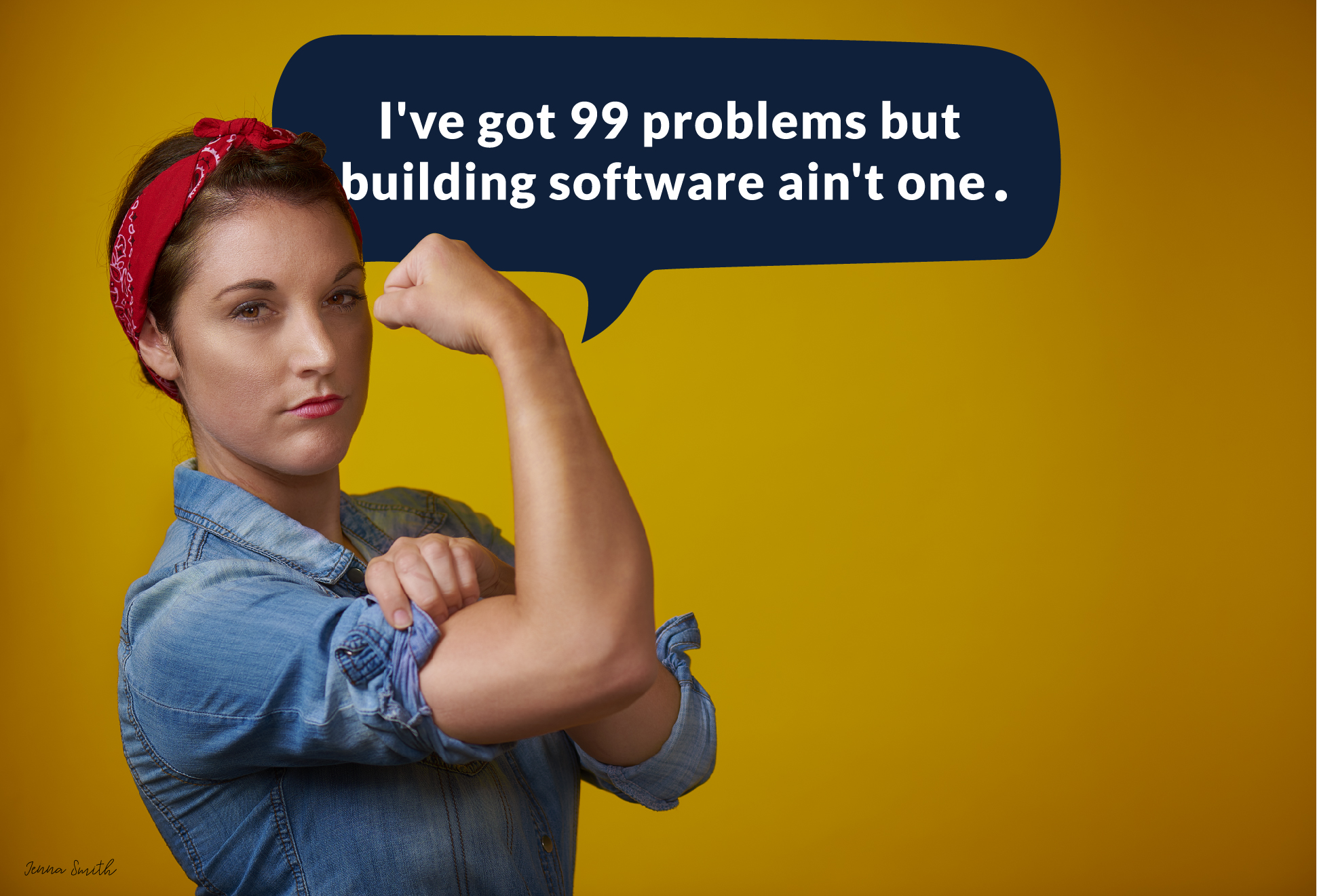 With the pandemic, worker burnout, and the horror of war in Ukraine, it’s easy to feel conflicted about celebrating Women’s History Month. But for decades women have been pulling double shifts as mothers and wage earners, often doing the same work as men for less pay, even making less than men for doing the same work at the same company. In other words, it’s always a good time to recognize women for keeping our culture and technology moving forward.

Which brings us to the iconic Rosie the Riveter meme at the top of this blog. Don’t be fooled by Rosie’s throwback look. Her potential flex is more relevant today than ever with female aviator Wally Funk—at 82 years of age—becoming the oldest person to fly to space on Jeff Bezos’ Blue Origin rocket, with the US electing its first woman vice-president, and with gymnast Simone Biles by becoming the first woman ever to pull off the jaw-dropping Yurchenko double pike vault in competition at the US Classic. But here’s the problem. These success stories belie a history of scientific contributions by women getting discounted or overlooked — like the woman shopping for an SUV in that TV commercial who gets ignored by salesmen until she speaks through the male puppet she pulls out of her purse.

That spoof could also serve as a metaphor for the invisibility of women in tech. But much better to give props to the female brainpower that paved the way for the digital revolution before software development was cool.

Houston, We’ve got a Problem!

When we talk about the digital revolution, men tend to get the cover stories. But women pioneered early software development which was a gateway for space flight, artificial intelligence, machine learning, and the like. This includes hidden figures such as Ada Lovelace, the 19th-century British mathematician who wrote the first computer program and software trailblazers Grace Hopper, Jean E. Sammet, Fran Allen, Arlene Gwendolyn Lee, and Dorothy Vaughn. Incidentally, Lee and Vaughn were women of color.

Women dominated the early years of computer programming but there was no glory in the work. It was all about doing the math without the help of Google queries and community forums. In 1960, the share of women in computing and mathematical professions was 27% percent according to the New York Times. In 2021, only 38% of women who majored in computer science were working in the field, compared to 53% for men.

Today, women hold fewer jobs in software engineering and computer science than they did in 1960. But the big question is why is this happening? Is it because computer marketers were hyper focused on boys and men, signaling that technology was a male domain? Could it be the fault of Hollywood movies that consistently portrayed geekdom as an exclusively male domain? Or is it a “culture fit” thing that excludes women from tech jobs they are otherwise qualified to do? It’s hard to know for sure, but perhaps it’s all of the above.

“So, I think this is a fantastic time for organizational diversity to massively improve,” Heneghan says. “To succeed in a world of pervasive digital disruption, companies must be customer-obsessed. And you can’t do that without greater diversity.”

“One of the things I’m keen to explore is how the skills required in the technology world today are different than 5 or 10 years ago — and I think these skills actually match up very well with the inherent skills that women have.”

Part of the challenge, says Heneghan, is debunking the myth that women don’t want to be in technology. She says that the inherent skills that women bring to the table are really needed in the digital economy—skills like collaboration, openness to learning, and building relationships. That’s because in the digital economy, these high-level social skills are critical success factors. But don’t get it twisted. This doesn’t mean we don’t also need more women with traditional STEM skills as well, says Heneghan. There’s room for both.

If it’s true that gender and racial diversity in STEM would benefit us all, the following story could be a game plan for success. Rather than trying to reboot the traditional way of training physicists, an Australian-born University of Michigan professor took a different approach. He created a more collaborative, interdisciplinary approach to graduate-level teaching applied physics, which boosted gender, racial, and ethnic diversity in the program and also produced a remarkable 10% of all Black students earning PhDs physics in the US From a gender standpoint, women comprised one-third of the program’s graduating class which is 2x the national average.

Practically speaking, here’s why the success of the University of Michigan program matters. Over half of business leaders say they’re dealing with a skills shortage that’s hampering digital transformation. Globally, the gap could reach 4.3 million workers and subtract about $450 billion from the global economy in unrealized output by 2030. And that’s just for the technology, media, and telecommunications sectors alone. In other words, businesses could benefit from widening their talent search to untapped demographics. Which makes the innovative approach of the University of Michigan’s applied physics program that much more relevant.

“Most major organizations have some form of diversity initiative,” says Heneghan. “But for many, it’s not something that lives and breathes and has momentum. At KPMG, we’re really trying to turn the business case for diversity into business outcomes, and we are making positive progress on this.”

Heneghan says that diversity isn’t just about checking a box on a diversity checklist. You can’t be a customer-focused business, she says, if you can’t build technology that works for everyone. And you can’t do that if you don’t also leverage the diversity of thinking in your organization.

Here’s another way to look at it. Globally, women drove a staggering $31.8 trillion in consumer spending in 2019. In the US, about 85% of all purchases are made by women. So, why aren’t more businesses prioritizing a workforce that looks more like the consumers who buy their products? And if the business case doesn’t support gender exclusion, is it a cultural thing?

“If you look at the most successful businesses,” says Heneghan, “they recognize the only way to be successful is to leverage diversity of thinking. And you need women as part of your team to do that.”