Software firms have long relied on a DevOps approach to enhance agility and collaboration in software delivery. CI/CD pipelines automate processes in the software development lifecycle (SDLC) to enable seamless integration and delivery of new features. While CI/CD pipelines enhance software development through automation and agility, they involve integrating numerous tools and services, which can introduce security gaps. Remediating and remediating these security gaps is key to ensuring secure CI/CD practices. This article presents a general overview of what you need to know as you secure your CI/CD pipeline.

While CI/CD pipelines enhance the efficiency of software development and delivery through automation, the core stages of the pipeline don’t include security by default. CI/CD security is the set of practices aimed at identifying and fixing vulnerabilities without significantly slowing down processes in the pipeline. CI/CD security practices mainly involve injecting penetration tests and active security audits to help reduce bottlenecks caused by late handoffs to security and QA teams. Secure CI/CD pipelines enable software teams to automate security for multiple deployment environments and layers of the SDLC, enforcing agility.

Each organization’s CI/CD pipeline has unique characteristics based on the business case, workload, and tech stack used. As a result, the implementation of CI/CD security differs based on use case. There are, however, security risks that are common to almost all pipelines, which warrant similar identification and remediation approaches. These risks include:

CI/CD operations rely on shared repositories to enable collaboration, configuration management, updates, and version control. All source code and configuration files reside on the Git repository as a single source of truth. Public repositories are popular in modern CI/CD pipelines since they reduce development costs and time. These repositories pose a security threat, however, as developers publish source code from their private machines into public, shared folders. Attackers can search through open-source registries as a reconnaissance technique and leverage the data gained for targeted phishing attacks, reverse engineering, and remote code execution.

The requirements of rapid development and delivery in CI/CD pipelines have led to the increasing use of open-source, third-party integrations. Some teams may import third-party integrations into the deployment environment without properly scanning the source code for security gaps. These integrations can introduce vulnerabilities into the CI/CD pipeline. Developers may also fail to follow best practices for code security, which increases the attack surface. Common code vulnerabilities include format string vulnerabilities, buffer overflows, improper error handling, and canonicalization issues, among others.

Secrets aid in managing access to data and resources within the CI/CD pipeline. These include passwords, tokens, API keys, and other authentication credentials used to validate users accessing sensitive systems in the pipeline. Exposed secrets can, therefore, grant an attacker control over part or all of the CI/CD processes. Secret management misconfigurations include hard-coded secrets, storing secrets in public cloud environments, and manual secrets management, among others.

Some factors to consider when selecting a tool to secure the CI/CD pipeline include:

Administering Security on a CI/CD Pipeline

With the changing threat landscape, administering security is one of the most crucial aspects of a CI/CD pipeline. The first step in securing DevOps workflows starts with assessing how you can apply the principles of DevSecOps to your CI/CD pipelines. One of the goals of a diligent assessment is to identify tools and strategies to administer robust security.

To fully realize the benefits of integrating security directly into the software lifecycle, teams should:

Secrets are often required at various stages of the SDLC. An easy way to provide these secrets is to reference them as environment variables in configuration files and manifests. Anyone who can access these templates and files can extract credential information from these files, potentially leading to a data breach. Software should use tools that encrypt, store, and enable the central management teams of secrets to keep credential data away from malicious users. To securely manage and distribute secrets, administrators should perform encryption at rest before storing them in the ETCD server.

First, encode the secrets in Base64 format as shown below:

Define the secrets in a YAML file:

Next, once secrets are created, you can use those to be applied into a Kubernetes pod. This can be done by creating a .yaml file, secret-env.yaml, whose environment variables are populated with data from the secret. The file’s specs would be similar to the following:

DevOps teams should implement authentication and authorization mechanisms to control the entities that can access specific processes and tools within the CI/CD pipeline. The teams should enforce the principle of least privileges to ensure resource access is only granted to those who absolutely need it. Data within the CI/CD pipeline should also be secured using tokens, access keys, and passwords to prevent the addition of malicious payloads into the pipeline.

Version control repositories (most often in Git) are a must-have for CI/CD pipelines. They foster collaboration and enable continuous deployment of features. Since the Git repository contains the application’s source code, Infrastructure-as-Code manifests, and intellectual property, a vulnerability in source control grants attackers access into the application’s design and implementation logic. Access to Git repositories should be secured using multi-factor authentication since they are a high-value target for hackers. Teams can also prevent accidental branches and commits using the .gitignore fileand educate developers on Git best practices.

Ensure Configuration Parity Across All Environments in the Pipeline

DevOps teams should ensure that all environments (development, testing, production, and so on) are configured similarly. With configuration parity, QA teams can accurately detect security issues during testing as these issues exist on all environment configurations. This parity can be achieved using virtualization and abstraction technologies like containers and Infrastructure-as-Code declarations.

It is common for security and QA teams to uncover security issues after application updates or deployments. This requires the administrators to roll back (revert) the deployment to an earlier version. The deployment should be configured to achieve a graceful rollback that eliminates the security issue until the development team has worked on it. Rollbacks are best achieved by retaining artifacts of an older version until the new deployment is approved for production.

It is important to monitor and test every resource in the CI/CD pipeline. Use a vulnerability scanning solution to test application code, environment configurations, and deployment scripts against a database of known vulnerabilities to eliminate potential attack vectors. These scanning and monitoring tools should be exploited across the entire SDLC uncover vulnerabilities as soon as they occur to prevents.

CI/CD pipelines are typically built with immutable infrastructure, which run specific processes and then terminate. DevOps teams should ensure all temporary resources such as containers, services, and virtual machines are cleaned up after termination. Attackers could use their open ports to gain initial entry into the deployment environment, so it’s important to properly manage these resources to reduce the security gap.

Administering CI/CD security requires a comprehensive, multi-layered approach to strengthen the defense across every point on the pipeline. These layers of security include: 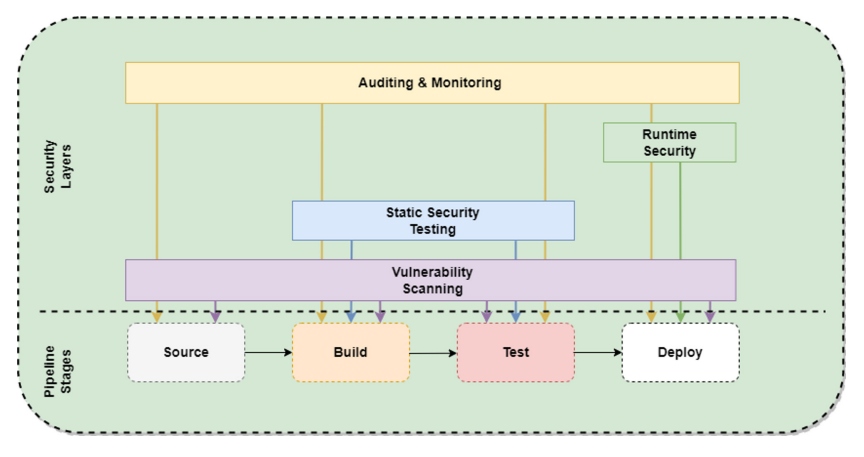 This layer relies on runtime application self-protection (RASP) tools to detect security threats for applications in live production environments. These tools scan configuration templates and continuously test the state of the deployment environment, then use a comparison to identify and respond to any runtime threats.

Application and infrastructure logs continuously track and store application and deployment data. Auditing involves analyzing these logs to infer patterns that can be used to improve the application’s security posture. Monitoring is the deployment of diagnostic tools that analyze metrics to gain an understanding of most system-related issues.

As code that runs in a CI/CD pipeline can be executed by anyone with access to the pipeline’s source code repository or container registry, DevOps workflows are known to introduce inherent security challenges. A recent survey projected that roughly 55 percent of organizations delay application rollouts due to security concerns. While a DevOps framework enables enhanced collaboration and automation, organizations must adopt a continuous security model that considers advanced strategies and tools to ensure comprehensive security across all layers of a CI/CD pipeline.