In our last blog post, Peter talked about how to Simulate A Docker Hub Outage, where he gave some context on what a pull-through cache (aka registry mirror) is and why Shipyard needs to mirror parts of Docker Hub.

Peter described the implementation as straightforward. While he’s not exactly wrong, I wanted to share some gotchas and tell you some caveats that I wish I knew before implementing this.

Here at Shipyard, we need a place to store the images that we build and pull, which is why we maintain our own internal registries.

I am assuming you already have your own registry up and running if you want to follow along or try out some of the techniques I describe. If not here is a good place to start.

Setting Up The Pull Through Cache

The Docker page on Mirroring Docker Hub is very clear on how to set up a pull through cache. There are only two necessary steps:

Docker allows you to pass the registry-mirrors as a flag when starting the Docker daemon or as a key/value on the daemon JSON config file. I add the flag to our Terraform since we use that to deploy to whichever cloud our customers might be on.

I went ahead and added the proxy section to our registry config and off to the races!

Now the hard part, testing to make sure this is actually working.

That means that next time we try pulling this image, it will pull from our own registry instead of Docker Hubs. mission accomplished so I thought…

When it was time to push images to our registry, we got a frustrating unsupported response:

With the unsupported response, we dug through the Docker docs and in the proxy option docs found:

The Resolution: Set Up A Second Registry As Pull-Through Cache

Our resolution was to set up a second registry, one where we pull images from and another where we push images to.

The docker daemon routes those requests accordingly and since they both share the same mounted volumes in our Kubernetes environment, these guarantees that pushed images can also be pulled.

The implementation here varies depending on how your registry is set up. For us, since we’re in a Kubernetes environment, the solution at a high-level was to:

How About Images In Private Registries…

Most of our customers use private registries (DockerHub, Quay, ECR, GCR, etc.) to store, well, their private images. Security is a first class citizen at Shipyard so obviously we had some questions and concerns to test/figure out:

Can We Still Pull Private Repositories Using A Registry Mirror?

Yes! Even though we do not use your credentials when setting up our registry mirror, we are still able to pull private images by authenticating before the pull.

One thing I have learned with security and infrastructure: always find multiple ways to test!

I pushed a local image to Docker Hub and made it a private repository on my Docker Hub account:

From my registry pod, I tried authenticating and then pulling the private image via the command line. Just to make sure the private repository wasn’t stored locally, I also logged out and tried pulling again, which fails as expected.

To functionally test this on Shipyard I needed a E test…so good E2 my favorite flask react sample app.

I modified the starter app to use the private image I had set up:

I added the credentials to my Docker account on Shipyard: 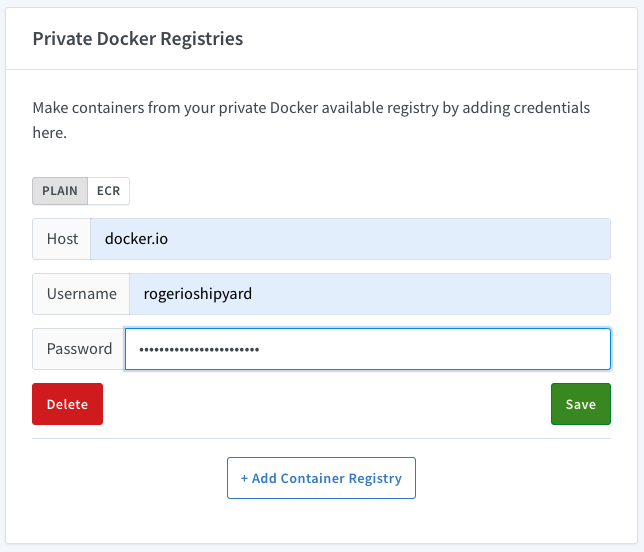 Lastly, I confirmed my sample app following Shipyard’s quickstart instructions, and it worked!

One More Check On These Private Registries…

Docker recognizes private images as such and does not store them in our registry mirror…but I needed to triple check…so I went ahead and used the ole disk size before and after pulling a private image trick:

Note: If Docker Hub is inaccessible, we unfortunately won’t be able to pull the private repositories. This is expected behaviour, since we depend on Docker Hub to authenticate the request but something to keep in mind.