Apache Pulsar™ is one of the most popular cloud-native messaging and streaming platforms with phenomenal usage by enterprises like Tencent, Comcast, and Verizon Media. When we launched the Pulsar client Starlight for JMS (S4J), which allows enterprises to run existing JMS applications on Pulsar, we made a bold claim: S4J can send one million messages per second with low latency.

In this post, we’ll show you exactly how we came up with that number and walk you through how to reproduce the results.

Where to Find Our Testing Framework

We used OpenMessaging Project, a Linux Foundation Collaborative Project, the same third-party benchmark framework we used for our Performance Comparison between Apache Pulsar and Kafka: Latency.

The OpenMessaging Project provides vendor-neutral and language-independent standards for messaging and streaming technologies, with a performance testing framework that supports various messaging technologies.

You can find the test framework in the OpenMessaging benchmark GitHub repository. The tests are designed to run in public cloud providers. In our case, we ran all the tests in Amazon Web Services (AWS) using standard EC2 instances. We did extensive testing using AWS spot instances as well, which allows excess capacity to be used at a discount.

We published the output from our final test runs as a GitHub gist. You’re welcome to analyze the data and come up with your own insights. You can also run the tests yourself and generate new data. You should get similar results.

How we used the OpenMessaging Benchmark

The OpenMessaging benchmark is an open and extensible framework. To add a technology to test, you have to add a driver with configurations and an implementation of a Java library that controls the producers and consumers. We contributed a JMS driver harness, which when configured for Pulsar includes the Starlight for JMS Installation in the test harness.

We adjusted the Terraform configuration and Ansible playbook for Pulsar to support JMS testing, Spot Instances, and a larger cluster.

The tests begin with a warm-up period prior to measuring the results, and publish at a constant rate that you configure recording latency and throughput at regular intervals. This data is provided in a JSON file at the end of the test.

If you plan to run the tests yourself, know that running them in AWS is rather cheap. We use a significant number of EC2 instances. The cost of the cluster we used is almost $9 per hour or roughly $6,500 a month. AWS spot instances will half the cost if they’re available. You’ll want to tear down the instance once you’ve completed your tests and copied the results.

We tested to find a configuration that would sustain production and consumption rates of one million messages per second, with the low publish latency and low end-to-end latency.

How Many Worker Nodes?

During testing, the worker nodes were observed with top -H and the number of clients was changed so that no java threads were CPU-bound. It turned out that we needed five producers and six consumers.

Setting up the Benchmark

We set up the benchmark tests by following the instructions documented in the OpenMessaging site, but altered for JMS. Note that because the OpenMessaging Benchmark evolves quickly, we’ve included a link to the exact commit used in our testing here.

You can alter the terraform.tfvars file adjusting num_instances as required. If you want to try Spot Instances, then alter provision-pulsar-aws.tf.

Next, apply the Terraform configuration and run the Ansible playbook. You should have the following EC2 instances:

The i3.4xlarge instance used for Pulsar/Bookkeeper is a powerful virtual machine with 16 vCPUs, 122 GiB memory, and two high-performance NVMe SSDs.

Applying the Terraform configuration and running the Ansible playbook can take as long as 30 minutes. Here’s a gist showing how to modify the configuration to use lower-cost Spot Instances.

The benchmark framework comes with a set of workloads that are YAML files. The ones that we created are in the GitHub repository.

Table 3. Workloads we used for our benchmark framework.

Some additional notes about our framework:

The Results Are In

These tests used Apache Pulsar 2.8.1 and Datastax Starlight for JMS, an Apache Pulsar client for Fast JMS Messaging. All of the results are available in a gist. 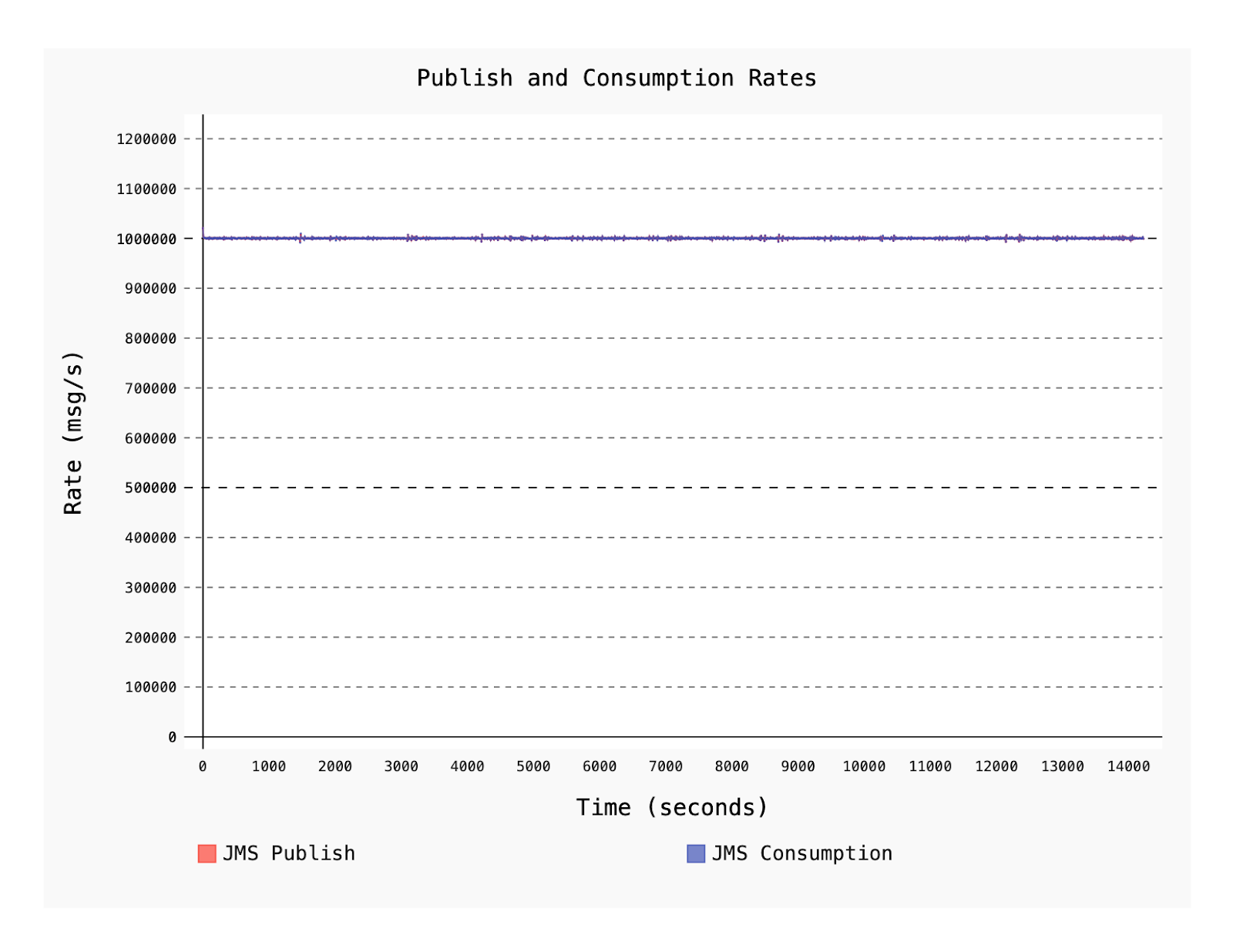 Our goal of one million messages per second is achieved over a two hour duration. The rate was sustained on both the producer and consumer workers, on a modestly-sized Pulsar cluster. 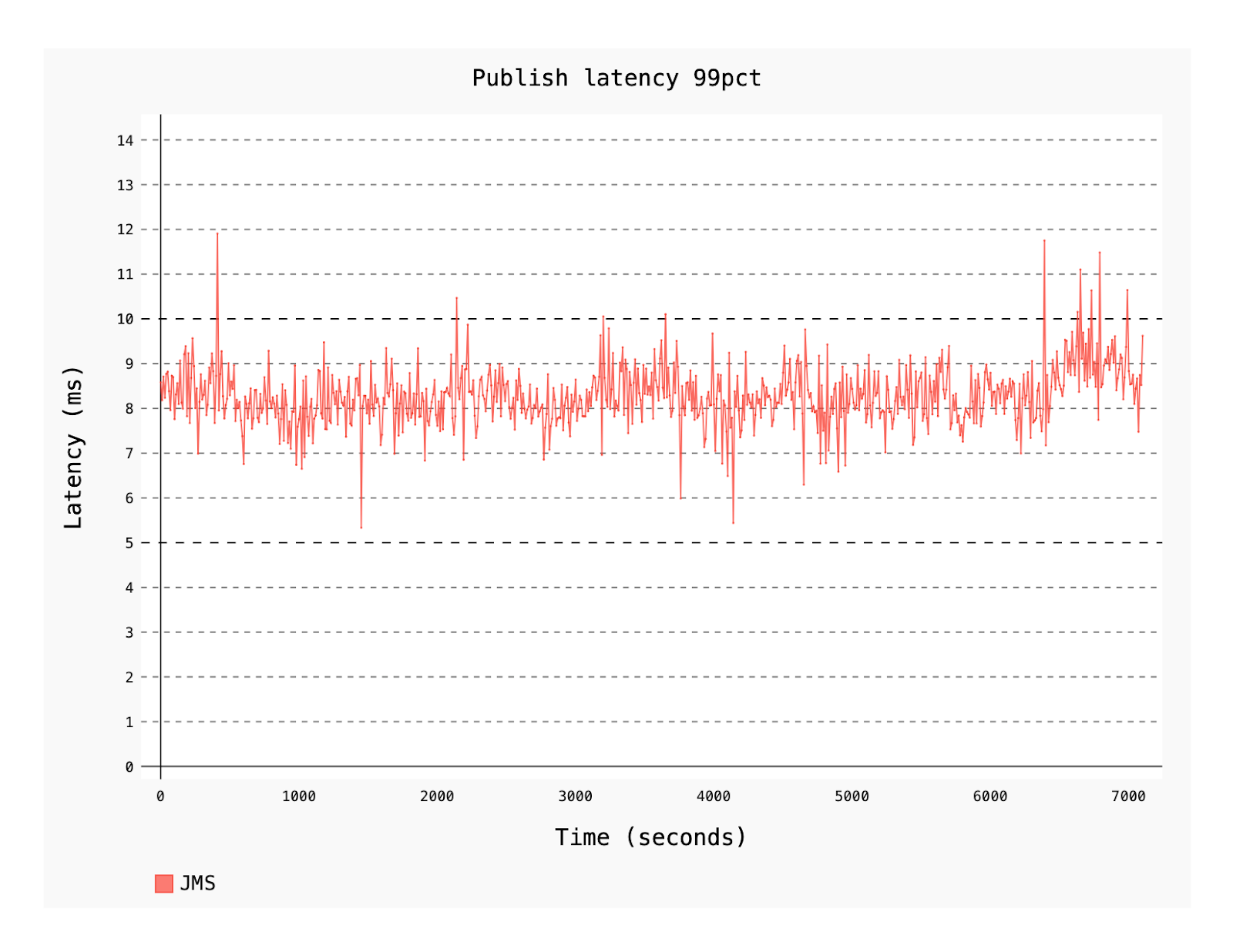 Our claim of 99th percentile publishing latency under 10 milliseconds is also confirmed. Note that a larger Pulsar cluster will be able to achieve even lower latencies on the tail of the curve, because the more load you apply to fewer broker/books in the cluster, the more the pressure on the 99th percentile, moving the inflection point for the latency quantile to the left. 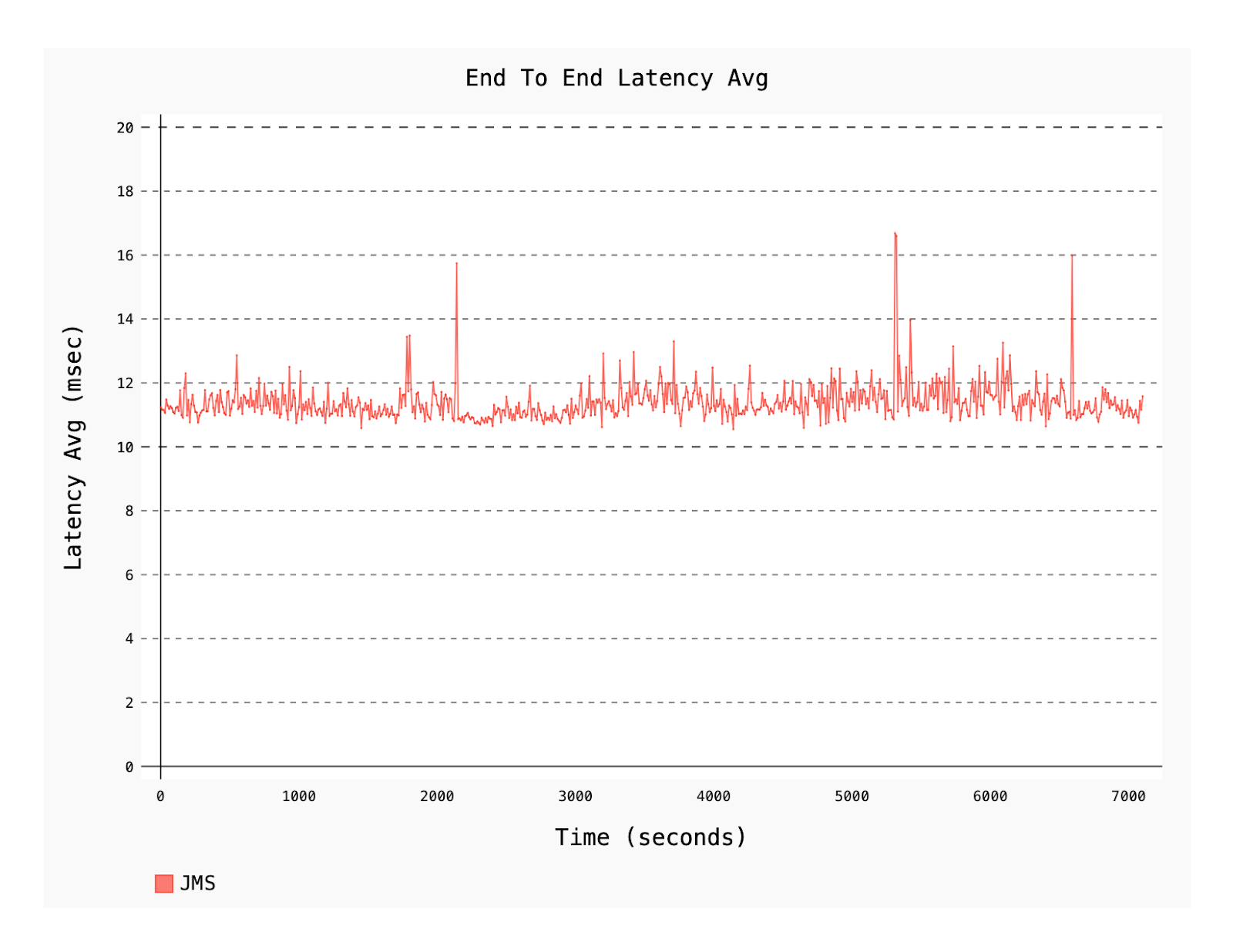 Lastly, we’ll show you a table that summarizes the latency distribution.

Table 4. A summary of latency distribution.

We’ve just shown, step by step, how we executed our messaging system testing framework, and how we confirmed the following results:

Unlike most traditional message brokers, Pulsar at its heart is a streaming platform designed for horizontal scalability. These tests illustrate what can be done with a modestly-sized Pulsar cluster. Growing the cluster by adding more broker and BookKeeper nodes means that we’re just scratching the surface of what can be achieved with Starlight for JMS.