The software testing space saw a paradigm shift in testing methodologies from manual to test automation with the new technologies. Digitization certainly comes with benefits, such as increased productivity; At the same time, it also results in the complexity of applications. Fintech applications are the best examples of banking services to complex app-based applications. The challenge is to provide the most satisfactory customer experience on these applications and perform well. Software testing is the game-changer and will play a vital role in this fast-paced DevOps world. It would be difficult for organizations to retain the best possible customer experience while delivering faster products to the market with traditional test automation approaches.

Let’s understand more about test automation and how it is inadequate in handling new age practices and customer expectations.

What Is Test Automation, and Why Is It Used?

Test automation is the practice in software testing that leverages automated testing tools to automate the execution of tests, manages test data, and utilizes results to improve software quality.

When testing software (on the web or desktop), we usually use a mouse and keyboard to perform our steps. Automation tools mimic those same steps by using scripting or a programming language, enabling the creation of an execution script.

In case we are testing a new version of a calculator application, where the developer has added two new numbers. A QA test would try two important test cases – first, check if the newly features logic correctly (new numbers) are working, and second if the is working or has the desired impact on the application.

Let us see the manual step of testing.

The equivalent automation script for the above test case is as follows:

The above script is a language representation of all the above manual steps performed.

How is Test Automation Done in Software Delivery?

An organization actualizes test automation with a system that incorporates standard practices, testing tools, and measures. Usually, software testers in organizations adopt a test automation framework- a mix of rules and guidelines and tooling for building test cases while improving the reusability of code, lowering the cost, and enhancing productivity.

Selenium is a widely known tool for test automation. Let us see how QA testers use Selenium.

Selenium is a suite of tools used widely by QA testers as it is free, open-source, and has unlimited test-automation capabilities. Most notably, it is used for cross-browser testing. It executes tests in a browser by using test scripts. Selenium IDE helps in recording the user interactions to build automated test scripts. It is a Firefox or Chrome plugin and was mainly developed to speed up the creation of test automation scripts.

Note: Selenium cannot automate desktop applications; It is only limited to web-based apps.
After the Selenium IDE extension is installed in the browser, one can record user interactions easily and convert them to a script.

Following is an example of a sample Selenium test automation script generated. 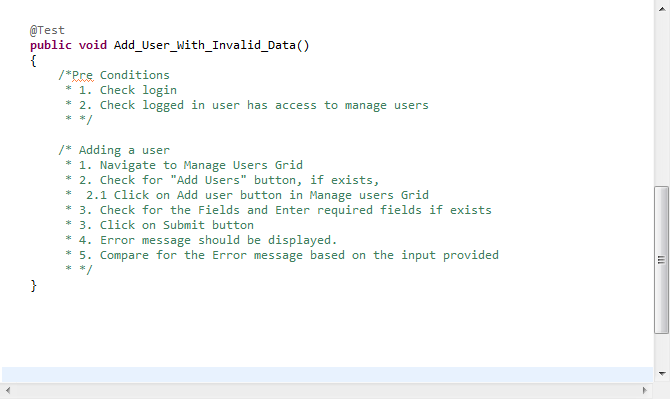 For applications where the deployments often happen multiple times a week, recording and playing using Selenium or manual generation of test-case will be tedious. Let us see the drawbacks of test automation in detail.

An autonomous testing framework ensures that minimum human intervention is required in the software testing process.

Autonomous testing tools such as ignio AI.Assurance captures all the underlying screen properties and labels and connects the field type to the action library (built-in), thereby ensuring that the dataset is created autonomously. The automation script is automatically generated by further utilizing the test scenarios, data set, and screen properties.

With DevOps and the Shift Left approach, Autonomous Testing plays a significant role in continuous testing right from the beginning of the SDLC process. With testing, enterprises can achieve the autonomous generation of test scripts and test scenarios and automated self-healing of automation scripts, change impact, and application defects. Using Autonomous testing, enterprises can reduce manual labor and scale up their business by focusing on innovation and adapting to newer business and IT requirements.