DevOps as a whole has been experiencing massive growth since 2014 when it first became a mainstream concept. This point is reinforced by the Vice President of Research & Strategy at Microsoft’s GitHub, Nicole Forsgren, who acknowledged that DevOps is rapidly growing worldwide. The consequence is that, as the market, ranging from small and lean startups to large enterprises, begins to realize the efficiency of DevOps, hourly rates for related jobs are growing as well.

By bringing together professionals from security, web development, education, banking, and telecommunication, we can observe a surge in demand for skilled people to fill DevOps positions.

Some of the most popular ones are:

On average, the DevOps engineer hourly rate is on an upward trend each year since recruiters are willing to offer outstanding salaries for professionals that bring unique skills to the table. In this context, some of the most in-demand skills include Kubernetes knowledge, AWS, Azure or GCP Certificates, and application scaling.

Why Is DevOps So Popular?

Understanding why DevOps got so big is essential to understanding its story. Before DevOps, Agile has been the most common project management methodology in use when it comes to software development pipelines since the early 2000s. In 2008, Patrick Debois attempted to improve Agile by having developers work together with Operations teams. This shift resulted in many slower parts of Agile and resource usage becoming more efficient.

Overall, DevOps is the natural evolution of Agile methodologies since it helped teams work towards the next application deployment with minimal difficulties. In fact, companies that have adapted to using DevOps are enjoying a lot of great benefits, such as:

These benefits guaranteed companies and startups adopting DevOps a large burst of growth, large enough to see competition being surpassed. Additionally, the quick response to failure associated with DevOps practices ensures greater uptime for companies working with always-online services. This helps avoid issues such as flight systems being down for extended hours.

How Can I Get Into DevOps?

If you want to become a DevOps engineer, growing into the area is all about acquiring valuable skills, learning technologies, gaining experience, and being diligent in your methodologies. Some of the valuable skills companies ask of professionals working in the field are:

Any of the previously mentioned skills or qualifications will significantly help in negotiating much higher salaries. Of course, years of experience will guarantee higher wages, but newcomers trying to get into the DevOps market can invest in more skills and qualifications to reach similar hourly rate brackets as those with more years in the area.

Comparing DevOps Hourly Rates in the US

In this section, I compiled the DevOps hourly rates for positions in the best paying cities in the United States. Hopefully, this information will help you find the most attractive roles and cities to work in the United States. If a city or DevOps-related job is not listed in the following graphs, don’t worry, we have provided links to the parent sources with exhaustive data to help you review the hourly rates that match your needs.

With that being said, the graphic below shows the DevOps hourly rates for positions in the ten best-paying cities in the United States. This information can help you pick the city with the most affordable cost of living and the best growth opportunities for you. 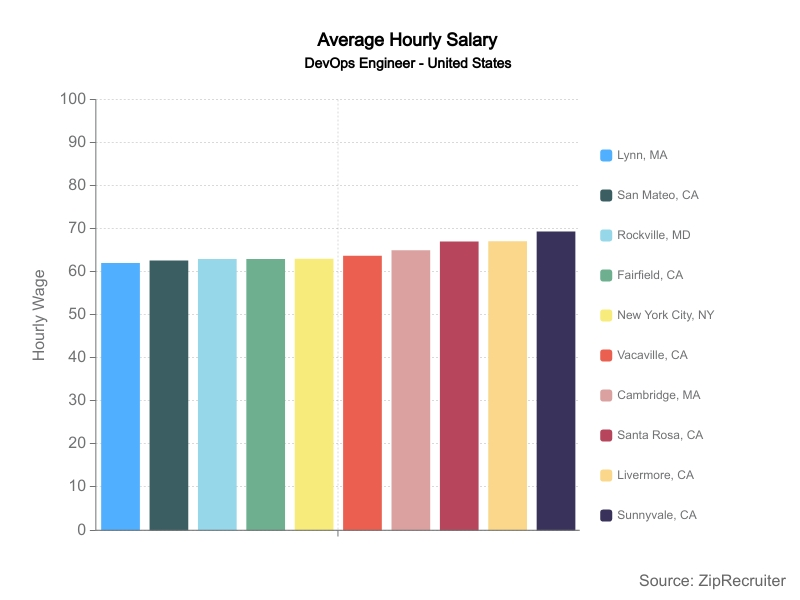 I also compiled the best-paying cities for DevOps Architects, a senior position with significantly better hourly rates in the graph below. This is because the role requires in-depth knowledge of several technologies from those working in the area. The good folks at ZipRecruiter provided this data. This data comes from all the users that post reviews, job postings, and third-party sources. The difference between the cities is only 8% between the highest and lowest hourly pay, which means you can pick the best place to grow without a significant disparity in compensation. 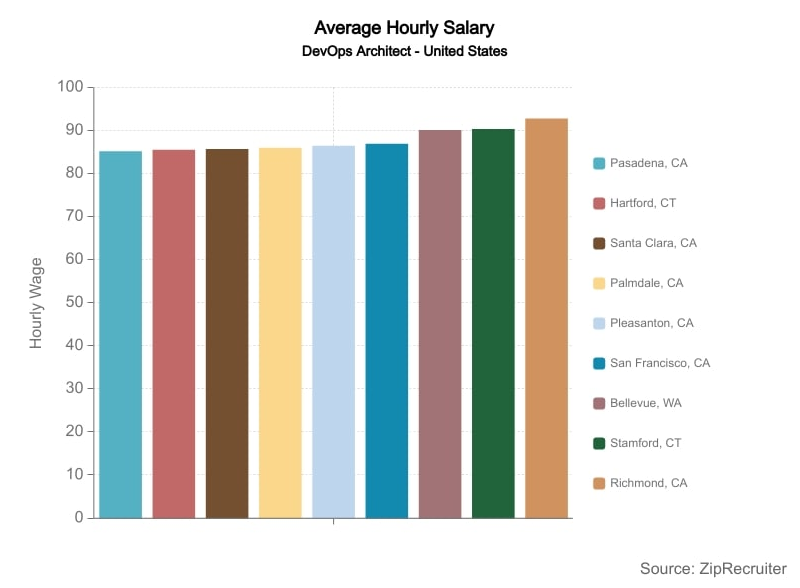 Lastly, we have the hourly rates for DevOps Consultant, which is another job position growing in popularity in the United States. Giants such as Amazon, Dell, and Oracle constantly look for qualified professionals to fill consultant positions. Most companies looking for professionals in this area require strong communication skills, knowledge of scripting languages ​​(Python and Perl), and revision control of source code repositories (Git). If you see yourself described here, maybe it’s time to find new growth opportunities in this area. 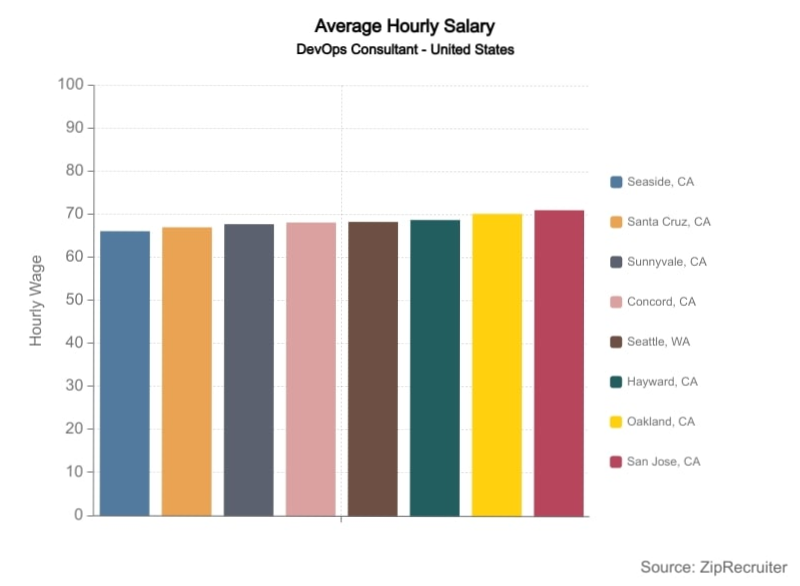 Below, we have compiled all the relevant data covering the DevOps Hourly rates in the US from the graphs in easy-to-read tables to give you a quick reference and ease in finding the city you prefer with a simple Ctrl-F. The data is based on the user, survey, and third-party data provided by ZipRecruiter.

I hope this data will allow you to find the best rates in the best cities and guarantee you a much easier time negotiating your DevOps hourly rates. DevOps is growing fast, and knowing which technologies to learn, certifications to obtain, and languages ​​to master are essential to growing your career. With this information in mind, together with salary data, you’ll be able to find the best-paying positions for your time and investment.