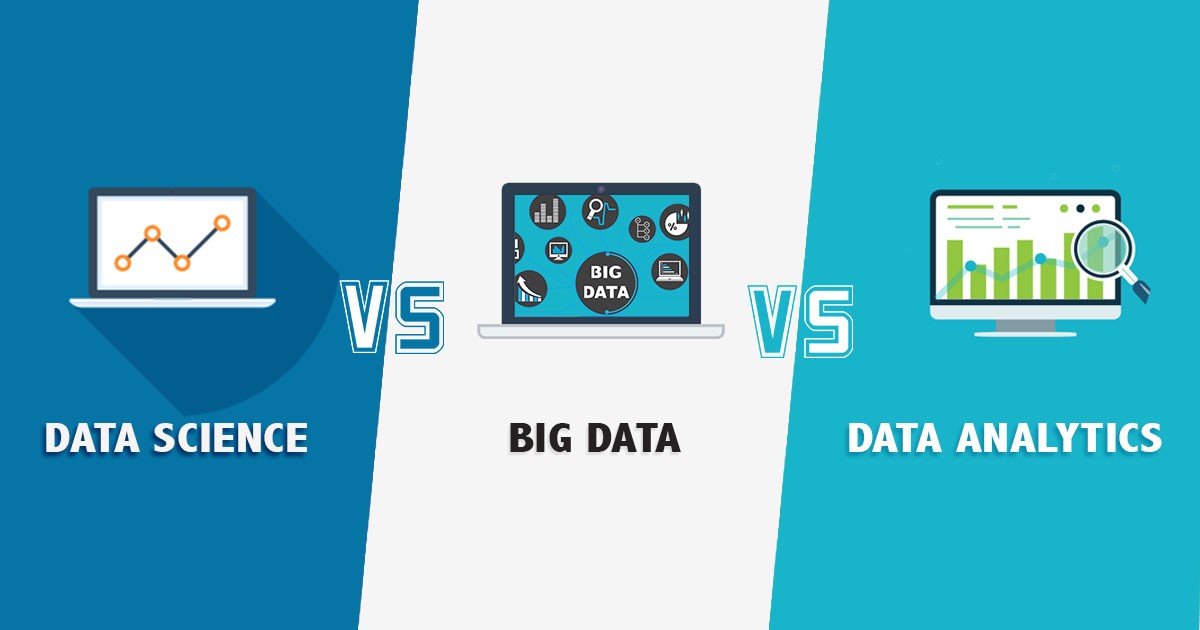 Especially in a business context, the metaprocess of digitization has established numerous terms relating to data analysis. However, on closer inspection, it is not always as easy to name their specific meaning and delimitation as one might think at first glance.

Data engineering, big data, data science, or data analytics? Lots of new terms and some need explanation. We would like to shed some light on the darkness and explain the differences and similarities of a common pair of terms: big data and data analytics. With the emergence of new branches and branches of industry, the need to make processes, occupational fields, and technologies communicable with new terms grow.

Big data is usually associated with the continuous generation of a massive amount of data. However, the quantity of the data that is generated isn’t the crucial part but rather what is used with the data. Big data has to do with generating massive data and using the data efficacy.

Understanding data science and data analytics as individual, independent areas is already the first misunderstanding that should be cleared up. This misconception is justified by the fact that the term “data analysis is used as a generalized super-category for the general examination of data. However, data science is specifically a sub-area of ​​data analytics. And of course, both data ask about correlations, causalities, and patterns and the findings that can be derived from them.

Role of a Data Analyst

A data analyst deals with well-defined and therefore dedicated data sets. These are visualized, analyzed, and examined for patterns, errors, and peculiarities. This almost always involves historical data. Which website visited how many unique users in which period? Which products were bought by which demographic groups and when?

In what period of time where most of the sensor values ​​measured? Extensive statistics can be obtained from this data and visualizations can be created, for example, to depict dependencies and relationships.

Data analysts often have extensive knowledge of mathematical statistics. The main competency areas and tools include databases and their management, SQL as part of them, and statistical programming languages ​​such as R and SAS.

In addition, there is a well-founded specialist knowledge in dealing with large amounts of data, which is required for analyzes of big data projects in order to understand data and make it communicable. It is a very application-oriented area of ​​work, which in large parts resembles a job as a consultant.

Role of a Data Scientist

Data Science deals more with the scientific principles of pattern recognition and classification. Often the underlying database is still indifferent and anything but well-defined. Data sets from different areas of investigation are included in the statistical evaluation.

Data scientists use regression analyzes and classification methods to enable predictions for the future. These predictions are usually not based on analytical methods. Rather, it is based on the statistical analysis of large amounts of data.

Data scientists combine scientific fundamentals with experience in development and programming. This is really about data processing on a large scale and the data will endeavor to automate as much of it as possible so that he can focus on his results.

The goal is to draw conclusions for the future from data from the past. This only makes sense if the data is properly processed, filtered, structured, and understood. Data science projects are implemented on a mathematical basis in the form of algorithms. In addition to various other programming languages, Python is particularly important in the field of data science.

The work areas of data analytics and data science often overlap. For both, the development of data sources, the consolidation, and cleaning, as well as the integration of tools, are essential in order to be able to work validly with the data sets.

As the data analyst, the data scientist uses methods of visualization, for example, to map statistical assumptions. Both departments require extensive knowledge in the subject areas examined in order to also grasp recognizable relationships.

Both the data analyst and the data scientist will therefore dig into the fundamentals of the respective work area in order to gain a better understanding of what the data is telling. The statements determined from the data can only be correctly classified with this specialist knowledge.

An occasionally overlooked but very important area of ​​work in both areas is communication within the team and with stakeholders. Data science takes place at the interface between technology and management and must communicate with both levels. Very few managers really want to understand what a support vector machine or a neural network is and how exactly it works. How reliable the results are and what they mean for the decision-makers, on the other hand, is very important.

Balance Between Technology and Consulting

Finding a good balance between the technical basis and consulting services is often a challenge, especially for data scientists due to their mostly technical background. The results must be presented in an argumentative manner or published without placing the technical focus in the foreground. These tasks are often carried out by data analysts who, indirect exchange with managers and customers, provide reports and reports.

There are differences to be noted between big data, data science, and data analytics. They all have to do with data but their primary objectives are different even though they all appear similar.